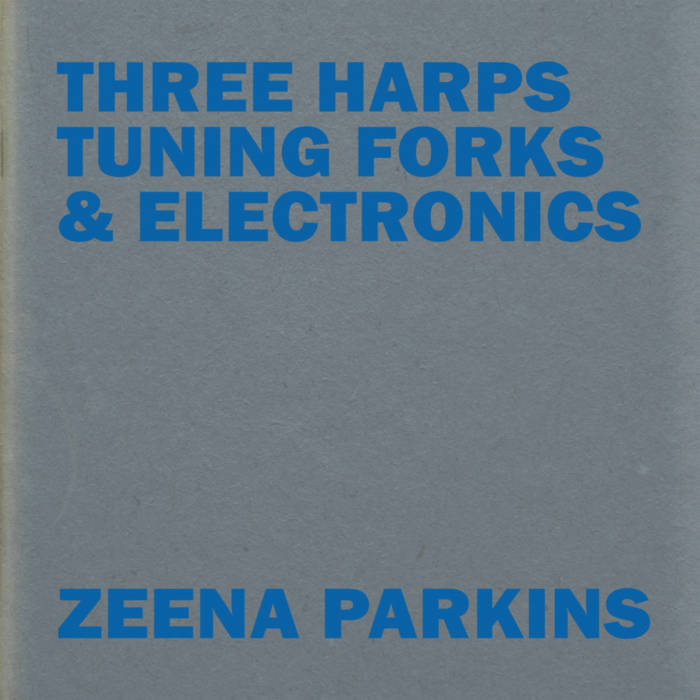 One more album which should have been reviewed much earlier, one more album that demonstrates the power of music and the possibilities of creativity. Parkins is known from her compositions for dance, film and for her collaborations with a multitude of artists in jazz, pop and avant-garde classical music. She changed the boundaries of playing the harp, by adding extended techniques, and by her own custom-made electric harps.

On this album she takes it even a step further, inviting three other harpists, Nuiko Wadden, Kristen Theriault and Megan Conley to perform her music. It is not always clear who plays what or even when Zeena Parkins participates herself or not. Parkins is credited with playing harp, but also EBows, basting brushes, metal bolts, rubber/hard yarn and wooden mallets, 2 inch ribbon and electronics.

The music is special and very precious in a way. It is light-textured and well-paced. On the first track all strings are muted, which gives a wonderful playfulness to the interaction, with rhythmic complexities increasing the fun even more. "Determined", the second track, deconstructs the acoustic performance, electronically but not always, dragging the sound out for instance, or multiplying it into a myriad of little sounds, or creating wonderful contrasts between stretched tones and plucked strings, laying a dark foundation under otherwise innocent chimes.

"Mouse" changes the approach: it becomes like the soundtrack for a shy mouse getting out of its hiding place, tentative and hesitating, looked at with sympathy. It is fun and by itself full of changes of sound and perspective.

Ikue Mori joins on one track, "Tuning Forks" with her electronics, and I assume that Parkins is the other artist here. The sonic change is of course radical. The plucking of strings is replaced with stretched electronic tones, tuning forks resonating against the harp and other extended tones, possibly played on one string of the harp. The atmosphere is light, welcoming and at the same time bizarre, because a lot happens that defies definition.

"Drumming" starts with very rhythmic arpeggios, with complex changes for the other harps to interact with, sometimes at different tempi and harmonic shifts. It's title starts justifying itself after 2:30 minutes, when the instruments are used as percussion instruments, again with clearly composed interaction. The tune changes again to calm plucking, then sawing sounds take over, with insistent intensity.

We are far from free improvisation here, and definitely no jazz is to be discerned, but that doesn't matter. Parkins creates her own musical universe, one of inventive sonic chiaroscuro, in which sounds are used to give depth and perspective to other sounds, deliberately seeking contrast and unity, and by doing that offering us sounds that we've never heard before.