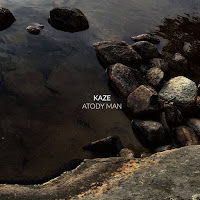 Of Satoko Fujii’s manifold projects and groups, Kaze is perhaps one of the more unique in terms of its make-up: with Fujii herself on piano, Peter Orins on drums, and Christian Pruvost/Natsuki Tamura providing a dual trumpet attack, it’s an idiosyncratic arrangement that offers up some of the finest, most powerful music in Fujii’s wide-ranging ouevre. The group has been active for eight years now, with previous recordings Rafale, Tornado, Uminari, and June (released by an expanded version of the group called Trouble Kaze) establishing them as a creative force to be reckoned with in the worlds of improvisational/experimental jazz. Many elements on Atody Man are immediately recognizable as belonging to Kaze’s singular approach: the patient unfolding of themes and moods, the explosive flurries, the melodies interlaced throughout that keep you invested. At the same time, Atody Man shows the group to be constantly in the process of tinkering with, honing, and adding new layers to their sound.

The first piece, “Hypnotique Sympathie,” begins subtly; Pruvost and Tamura make good on the name of the group, “kaze,” which is actually the Japanese word for “wind.” The trumpets release a series of extended cries, broken only by occasional moments of silence. As the cries stretch and grow longer, the tones themselves start to deterioriate - they wheez, croak, and crack, eventually giving way to brooding chords from Fujii. When the quartet eventually “gets going,” it’s not exactly straightforward. Pruvost and Tamura wring all manner of twisted, strangulated notes from their trumpets, Fujii moves from dramatic minor-chord variations to brief moments of tumult, and Orins undergirds it all with his busy and elusive drumwork. The track builds and builds, the pressure mounting, until a recognizable theme coalesces and takes things in a direction that seems more indebted to contemporary classical or post-rock than improvisational music; Fujii unleashes a measured and stirring melody that Pruvost and Tamura accompany in relatively “straight” fashion, while Orins provides a simple, steady 4/4 rhythm that, rather than detracting from the piece, helps to ratchet up the cinematic atmosphere.

“Moving,” the second piece, is also the longest and perhaps the most complex. It opens with a brief exploration from Orins, but Fujii is quick to join in with menacing and serpentine clusters of notes. Eventually, however, these clusters turn into a series of repeating chords over which Pruvost and Tamura lay out the main theme. A short stretch of silence, and the two return with more of their fascinating tonal mutations: it’s a conversation, but one in which both speakers’ mouths are stuffed with linen - they’ve got to snort, squawk, and squeak to get their ideas across. When Fujii comes in as the third voice, it’s almost as a translator - her lines, though obtuse and evasive, are at least interpretable. Eventually, though, she too succumbs to the warped logic guiding the colloquy, her lines veering off into splinters and shards. After a quiet break from the clamor, Fujii and the trumpets present a new theme: solemn and sparse, it marks a stark contrast with the foregoing babel. In the final minute, however, the theme collapses into disarray, and a wild closing melody springs up from the ashes.

“Méta-Blizzard” and “Morning Glow” are two shorter entry-points into the manifold styles and approaches that Kaze work with. The former is a varied piece that finds each player drawing out a range of tones, timbres, and textures from their respective instruments. As with many of the tracks on Atody Man, it resolves into a recognizable theme and melodic direction - only to explode itself within a few bars. “Morning Glow” reflects its title, at least at first. Fujii’s wistful, crystalline notes scatter across the silence, thoughtful and somewhat hesitant. As the pace picks up, Fujii’s scattered points of light fuse into the main melody, Pruvost and Tamura join in, and Orins provides a rousing backdrop. The piece undergoes several more interesting transformations over its runtime, but the lovely and serpentine theme always waits in the ranks for the players to take up again.

“Inspiration 2” is another long one. The first two minutes are taken up solely by a trumpet (whether Pruvost’s or Tamura’s, I can’t say). It’s an intriguing solo, one that largely stays away from the timbral/tonal experimentation of the previous pieces, opting instead to carve out a brisk, brash path through the silence that is, for the most part, rather straightforward. When the other players finally join in, they do so with the same sense of breathless abandon. As the piece develops, several ideas are explored: there’s a sputtering, acidic trumpet solo that more than makes up for the clarity and directness of the first, there’s simmering drama, and there’s a final burst of wild energy. “Atody Man” ends things on a rather trepidatious note, with Orins’ percussion seething quietly, Pruvost and Tamura proucing disquieting half-thoughts that seem to rise up from nowhere, and Fujii’s rumbling piano. As conclusions go, it’s certainly bleak; nevertheless, it leaves an impression, and it encourages the listener to go back to the beginning and take the whole, winding journey again.

Kaze have played to their strengths on Atody Man - the exquisitely dramatic melodicism, the bombast, the fearless experimentation. As a result, they’ve turned out one of the finest and most diverse albums of their eight-year tenure. Here’s to hoping they turn out many more!