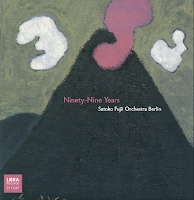 If anything, the music of Satoko Fujii remains totally unpredictable, which is possibly the only constant in her oeuvre. This album is a good example. For Orchestra Berlin's first album, released in 2015, Fujii asked German saxophonist Gebhard Ullmann to bring a band together for a new composition she wrote. Now we get almost the same band for the orchestra's sophomore album: Gebhard Ullmann and Matthias Schubert on tenor saxophone, Paulina Owczarek on baritone saxophone, Natsuki Tamura, Richard Koch and Lina Allemano on trumpet, Matthias Müller on trombone, Jan Roder on bass, Michael Griener and Peter Orins on drums, with Fujii herself on piano. Quite an interesting and original line-up.

And so is the music.

The album opens with "Unexpected Incident" (a Japanese government's euphemism for the Fukushima nuclear incident). It starts with tentative and increasingly dense percussive sounds, as an intro for improvised chaos by the horn section, which turns into a great rythmic unison theme full of drama and tragedy over which Ullmann's sax cries out in human misery about what's happening. Humanity and relentless violence and distress alternate giving the piece great depth and tension.

"Ninety-Nine Years", the title track, is dedicated to Fujii's late mother-in-law, and starts with a relatively long intro of lyrical solo bass lines by Jan Roder, joined by the drummers, and then by the baritone sax, for a spacious, quiet and equally restless improvisation. The rest of the band waits till ten minutes into the track to participate, with the horn section playing a slow ascending theme in contrast to the agitated baritone and drums. Conflicting emotions and contrasts again. Serenity and distress and sadness.

"On The Way", starts again with a single instrument, now with percussion for almost three minutes when the joyful and rhythmic contrapuntal theme by the horns adds volume, only to disappear again as rapidly, leaving the ground layer of odd percussion intact. Tamura joins on trumpet as only he can: with clamors and complaints shouted through his horn, squeezed and grumbling, a little crazy even. The rest of the band interrupts the madness without subduing it, even worse, they seem to become infected by it.

In contrast to the three previous tracks, "Oops" start with a mad theme played by the entire orchestra, full of power, energy and intensity, stopping for a wild sax solo by Schubert, whose howling gets comforting support from the slow rhythm section. Then the trumpet (Allemano?) gets the solo spot, bluesy and wild at the end, joined again by the mayhem horn section, which gets split in two groups: slow and superfast.

The last track, "Follow The Idea", starts with complete madness and orchestrated seconds of silence interspersing it. Weirdness ensues. What is this? Noise? Organic musings? Incantations? It sounds silly, with surprises, unexpected moments of composed arrangements, which last too little to be real. Manic intensity ends the album.

And Fujii? Not to be heard. At least not on piano. Yet her signature is all over the music. The composed improvisations, the sense of drama and contrast, the tension between clashing emotional power, between the human voice in a world of violence, the cinematic development, the sonic effects used to perfection to create a wonderful kaleidoscope of sounds unheard, the physicality of it, touching every nerve muscle sentiment in your body, keeping the listener as intensely involved as the musicians, to be surprised and to be moved and to be overjoyed by the next creative idea and novelty.

Fujii's music is unique. And the great thing is that she keeps inventing herself, with all her many bands playing totally different things, but all with the same underlying quality and recognisable vision.

Don't miss this one.