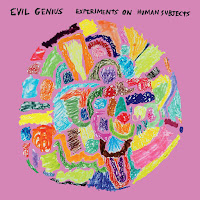 If I’m asked about a jazz trio with tuba, I’m likely to think of Sam Rivers and his tuba trio with Joe Daley and either Sidney Smart (on the Black Africa! releases) or Warren Smith (on The Tuba Trio set). There just aren’t a ton of tuba trios that I’ve come across, so Rivers is more or less my touchstone, which is partly why Evil Genius blew my mind when I heard their 2015 debut, Bitter Human . Now, the trio of Max Kutner on guitar and bass, Stefan Kac on tuba, and Mike Lockwood on drums is back with their sophomore release. Experiments On Human Subjects is everything I heard on Bitter Human amplified by two years of touring, composing, and experimenting.


Evil Genius is one of several bands at the forefront of an emerging LA scene, coming mostly from the extended Orenda Records family (in other words, if you like Burning Ghosts , you will like Evil Genius). Like some other young groups, there’s a driving post-punk rhythm, mathematical prog-like complexity, and wailing free improvisation. But one thing that makes this scene so important right now is their sharp take on the modern world.


Album opener “Skateboarders Versus Security Guards: Double Agents in a Proxy War Between the Forces of Good and Evil” announces its intention in both title and a three-pronged, syncopated opening. As noted in the liners, both this and the comparatively breezy “An Iron Post In a Velvet Footing” grew out of Kac's work as a security officer in the San Fernando Valley. In short, Evil Genius is looking at the world from the bottom up, rather than top down, and seeing us mucking around, fighting each other over meaningless transgressions and missing the bigger forces at work.


But just when that threatens to get too heady, “Tour de Stadt” breaks the mood with Lockwood on a mock-disco hi-hat and Kutner and Kac doubling on a circusy, Braxtonesque melody. When Kac takes a solo, he jumps up at least an octave above Kutner’s bass and extends the range of the trio substantially. It’s an extension that continues to reverberate throughout the album, as on “Asterisk” when Kutner and Lockwood drop a ’90s ska beat under Kac’s solo or on the head-banging middle section of “Colonel Karl Marx and Keenan McCardell.” These are moments when I would swear Evil Genius is at least a sextet, their sound is so impressively large.


The album ends with an appropriately delightful and humorous ode to the inimitable jazz sweater : “The Great Pilling of Pat Metheny's Sweaters.” Kutner’s sound is open and airy, and Lockwood brings a light touch to a song that coasts gently to a close. Evil Genius is remarkably dexterous when it comes to mixing and swapping styles, very much in the vein of Mostly Other People Do the Killing, and their music is a great reminder that humor is a potent ingredient, one that’s too often left out of the mix.