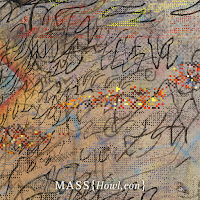 Jason Moran has long been immersed in contemporary art, as well as music. Fortunately, as Moran recently founded the record label [Yes Records] with his wife and fellow talent Alicia Hall Moran, his work in the art world is increasingly reflected in his prodigious record output. MASS {Howl, eon} comes out of a fascinating collaboration with artist Julie Mehretu. The result is a timely, important work, with deep resonances to the history of the American West, as well as a highly enjoyable listen.

Just a few days after the 2016 presidential election, Mehretu began painting the massive murals that now stand at the entrance to the San Francisco Museum of Modern Art. Due in part to their scale, she painted these works at the Church of St. Thomas the Apostle in Harlem, NY. Moran composed the music there while Mehretu painted. The album, furthermore, was recorded inside the church, with Moran on piano, Fender Rhodes, and percussion, Graham Haynes on cornet and electronics, and Jamire Williams on drums.

The space is immediately present, almost as a fourth musician, on the album. Its scale and acoustics are beautifully apparent from the first note, as is its sacred nature. Many of Moran’s compositions gravitate towards the key of Ab because it is the resonant frequency of the church. The pieces, furthermore, take on religious topics in their titles and subject matter. The first track, “Benediction”, begins with Graham Haynes on a beautifully-constructed melody accompanied by pounding piano chords from Moran and march-like drumming from Williams. This tension between a soaring melody and an almost-military backing is fascinating and, I believe, important to the structure of the album. It is a perfect opener because it encompasses the dual instincts which drive the music: idealism and conflict.

In the second composition, “Confession,” Haynes’s cornet playing becomes softer—quite literally confessional. The listener may ask to what Haynes is confessing? I believe the answer lies in the philosophy of Moran’s and Mehretu’s work here, as well as in its relationship to San Francisco. In the American psyche, the West is as much an ideal as it is a real place. Until the 20th century, the West *was* the future. Underlying these lofty ideals, however, was a concerted operation of ethnic cleansing, one which decimated Native American tribes and consequently perpetuated American systems of racial inequality on new land. In the Church of St. Thomas the Apostle as well as now in the entryway to SFMoMA, these artists have created a sacred space for examination—and confession—of this fraught history.

On “Creed”, the music reaches its densest point, characterized by a driving ostinato from Moran, who switches from acoustic piano to Fender Rhodes. Here, perhaps more than elsewhere on the album, is the point of greatest conflict, in which the forces of history convalesce most directly. In the subsequent compositions, Moran’s writing fluctuates between extreme density and moments of exquisite space, a technique which mirrors the construction of Mehretu’s paintings. Moran plays most with concepts of compositional erasure on “Responsorial,” a beautifully produced recording in which free jazz fans will feel particularly at-home. At times, it seems he is almost using Mehretu’s works as a graphic score.

As Mehretu expressed in an [interview with Art21], landscapes are always politicized. The Hudson Valley school’s paintings were embedded in the DNA of the Manifest Destiny movement. Similarly, Ansel Adams’s photography is the visual embodiment of the conservation movement. Indeed, the history of land in the American West is characterized by destruction and conquest followed paradoxically by rapid development and conservation. Works that “document” landscape have a direct relationship to and influence on human behavior.

Mehretu, consequently, aims in these works to develop a contemporary mode of representing landscape, one which is cognizant of the sedimentary layers of history and conflict that shape the land. To do so, she began by taking images out of California history, particularly of race riots and injustice, and blurring them. Overlaying these images are a panoply of graffiti-like marks, technological allusions, and erasures. She presents a complex exploration of the impulses that shape present-day San Francisco—a dream of frontier colonization turned into the center of the technological world and a hotbed of rapid gentrification. She, consequently, examines how erasure and omission can shape landscapes just as much as conservation and idealism. 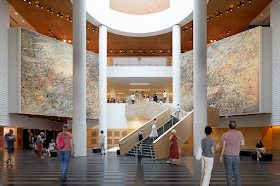 MASS {Howl, eon} concludes with “Summon”, a beautiful 18-minute piece. It begins with spacious electronic notes and develops organically into improvisations that demonstrate the interactive cohesion of this ensemble. The shifting textures, as well as Moran’s particularly sublime playing around the 12-minute mark, remind me of the structure of Mehretu’s paintings. Eventually and miraculously, it all subsides into a a final melody which feels like the natural counterpart to the initial one in “Benediction.” It is a fitting and satisfying end to a powerful listening experience. This album is a musical treat, a document of a fascinating creative collaboration, and a pertinent examination of historical memory—highly recommended.