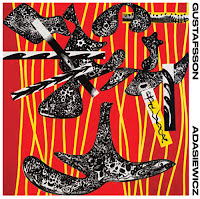 Fans of improvised music, free jazz and crossover genres know Mats Gustafsson for being able to spit fire with his saxophone. He has proved this both in his long time projects The Thing, Fire! and NU Ensemble as well as in his collaborations with Thurston Moore, Merzbow and Balázs Pándi . Jason Adasiewicz, a prolific member of the Chicago scene, has reached a certain degree of popularity for his albums with Peter Brötzmann (among others), on which he has shown that one can let it all hang out on the vibraphone, too. However, if you expect boisterous iconoclasm on their first duo album, you’ll be surprised.

From the very beginning the atmosphere brings to mind the soundtracks of French film noir classics. Most of the pieces are incredibly slow, quiet, even tender and surprisingly tuneful. Some of them remind me of Bohren und der Club of Gore albums, albeit Gustafsson and Adasiewicz know when they have to add an extra piece of angularity and tempo in order not to get cheesy (e.g. in “Dagger“ and especially in “A Fall They Call It“, the latter presenting the more familiar Gustafsson side). Then again, the music is sometimes so reduced that it sounds as if you were listening to a prop airliner in the distance (“See Them Cold, But See Them Last“).

The title track is the central piece of the album. It’s a cover version of a John Abercrombie number (ECM, 1975; with Jan Hammer and Jack DeJohnette), one of his most beautiful compositions. The original starts with elegiac guitar lines over subtle cymbal work and synthesizer drones for almost five minutes before the actual hook line emerges. The Gustafsson/Adasiewicz version comes to the point much faster and adds a lot more drama to the piece by stripping it down to the essentials: Just a plain melody on the sax and the reverberant chords on the vibes, with very little variation. Gustafsson roughs the tune up with a lot of vibrato towards the end, which has a much more melodramatic effect compared to the already emotional original. I haven’t heard Gustafsson play like this since the title track of Shift (NoBusiness, 2013), his one-time-collaboration with his fellow countrymen Correction.
Yet, don’t be misled. Of course this is a Gustafsson album, his sound is very recognizable. He uses his typical wide-ranging long notes, just played with less anger and aggression than usual. At the end of the day the music evokes an alternative kind of tension, one with a different kind of energy, one with less volume, one with a bigger focus on restraint. Gustafsson and Adasiewicz explore more subtle dynamics and moods, which are still full of passion and intensity.

Timeless is available as a CD.

You can buy it at www.downtownmusicgallery.com and www.instantjazz.com/
Paul on Sunday, July 15, 2018
Share