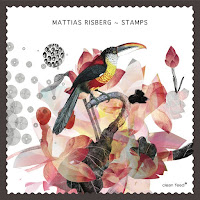 Swedish keyboards player Mattias Risberg says that he has a “passion for old soulful instruments”. These instruments include the mellotron, Hammond organ, vintage, analog synthesizers, clavichord and even pipe organs. Risberg is known as a close associate of fellow-Swedish reeds hero Fredrik Ljungkvist and played on his ensemble's Yun Kan 10 (Hoob, 2013) and collaborated with him again on the beautiful And Now The Queen - A Tribute To Carla Bley (Lilao, 2016). Risberg is also known as keyboardist whose musical interests are deeply rooted in several music idioms, going from John Coltrane, Jan Johansson and Paul Bley to J.S. Bach, Igor Stravinsky and Olivier Messiaen, through the likes of Frank Zappa, early Genesis and Yes.

Stamps distills Risberg many interests to the piano, now and then, prepared with the sole aid of the pedals of the vintage Moog Taurus, and performed alone by Risberg, spontaneously over six weeks of recordings during March and April 2017, with no script or overdubs. This recording reflects on Risberg’s youth, a time when he was guided by music, books, paintings, and his small collection of stamps.

The 11 short improvisations, all titled after pigments, highlight Risberg’s highly personal language that crisscrosses stylistic borders, but is also inspired by other art forms. There is a playful sense of undisturbed stream of consciousness on pieces like “Vermilion” and “Crimson”, that Risberg attaches to James Joyce, while the delicate yet complex architecture of layers of sounds on “Cobalt” may be an indirect influence of the paintings of Paul Klee. On other pieces like “Marine” he creates a quiet and mysterious, almost transparent, cinematic soundscape that can fit a Scandinavian-noir film. Only the improvisations “Scarlet”, “Viridian” and “Titanium” reference jazz improvisations, at times sounding as emotional homages to the chamber jazz of Bill Evans.

But most of all, Risberg uses the piano as a sonic playground. He enjoys the playful experiments with the piano sounds, as he explores, shapes, and mutates the timbral range of the conventional and prepared piano with the synth pedals. Always ready to embrace the new sonic options even if they sound as leading to chaotic dead-ends as on “Phato”. The open, playful process of experimentation in itself is arresting enough, for him, the improviser, and for us, the listeners.