Erik Carlson is an intriguing violinist. In addition to his teaching duties at the University of California at San Diego, Carlson is or was a member of the International Contemporary Ensemble (not the ICE we need to abolish in the US), The Talea Ensemble, and the Theatre of Eternal Music String Ensemble, to name but a few. He has given the world premieres of a huge number of pieces, including works by John Luther Adams, Antoine Beuger, Pauline Oliveros, Mario Davidovsky, Brain Ferneyhough, Christian Wolff, Jaap Blonk, Alvin Curran, Sylvano Bussotti, Jennie Gottschalk, Eva-Maria Houben, Alvin Lucier, Jessica Pavone, Ben Johnston, and many, many more. I had the pleasure of seeing him live a few years ago at a house show split with the Tanya Kalminovich & Mat Maneri duo.

Which brings us to two recent duo recordings: 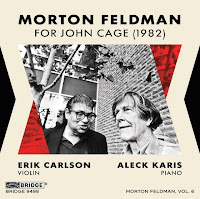 Morton Feldman and John Cage had a long friendship, having met in the lobby of a New York Philharmonic performance in 1950 (both had left the concert early, unhappy with the audience reaction to Anton Webern’s Symphony, Op. 21). In 1966-67, Feldman and Cage engaged in the Radio Happenings on WBAI which is mostly just the two of them talking about music for five hours (and can be listened to online here ). While their music is pretty far apart, it’s clear that they enjoyed a close relationship, remaining friends until Feldman’s death in 1987. Feldman’s 1982 piece For John Cage was part of a series of works dedicated to Feldman’s friends including Philip Guston, Samuel Beckett, Frank O’Hara, and others.

For this recording, Carlson is joined by the pianist Aleck Karis (who is also on faculty at UCSD and is a champion of new music in his own right). The duo display excellent musicianship through out, deftly engaging with Feldman’s material, bringing out all of the subtle variations of the piece’s repetitive use of material across it’s nearly seventy-two minutes. The performance is consistency enthralling and exceptionally well recorded. Highly recommended. 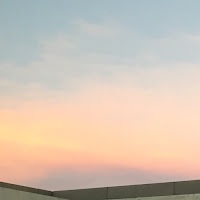 Eva-Maria Houben is a German composer and organist, most often associated with the Wandelweiser group. Her work runs the gambit from solo piece to orchestral compositions, from pieces carefully notated to pieces that embrace indeterminacy and have no traditionally notated material. On Duos, Carlson is joined by the percussionist Great Stuart, mostly known for his ongoing association with Michael Pisaro and continued championing of new music. Stuart is on faculty at the University of South Carolina.

Recorded in February of this year, Duos contains four pieces by Houben, explored in great detail by Carlson and Stuart. The two have been performing Houben’s works for a number of years now and it shows. Their ability to hone in on microscopic ideas and expand them outwards in to nearly static but subtly shifting universes of sound is compelling.

Like much of Houben’s music, many of the pieces on this album flirt with silence and quiet. Drones are a thing, but not in an ambient way. There is nothing ambient about this music. The music demands attention, forcing you to actively engage with it, to open your ears, to fall into the the black hole at the center of this album.