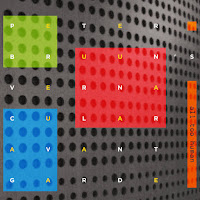 Peter Bruun's All Too Human outfit is a quartet that consists of Kasper Tranberg, trumpet & cornet, Simon Toldam, keyboards, Marc Ducret, guitars, and Peter Bruun himself, on drums & synth. The music on Vernacular Avant-Garde is a mixture of jazz fusion, progressive, math, and post-rock, without it sounding like its something that's been thrown together as its clearly not. What we have here is six carefully composed pieces of music, with enough room and space to allow the musicians to be able to contribute creatively to the set of music, allowing the music to breathe when it needs to and at other times producing a rhythmically tight, but interesting set of musical sequences.

The album opens with 'Follow Me', a funky piece, complete with groovy moog bass line, syncopated horn melody and a lovely climbing chromatic figure that provides tension and musical direction. The piece is in binary form where the second-half of the piece completely breaks down into an ambient soiree that leads through to the end. 'All Too Human' starts with sparse percussion sounds from Bruun before being joined by some spacey sounding synths, recalling sounds I frequented more often with in the 1980's, something to do with the Juno keyboard that Toldam uses I suspect! The piece builds nicely and with the introduction of Tranberg's horn, it reminds me of Mark Isham's music from the same sort of time period, creating a sort of ambient music but with substance. The title track is the longest on the album, sporting contrapuntal chromatic lines, synth sounds that this time remind me of Magma's Udu Wudu album, and some subtle and freer interplay between the guitar and horn that's a nice contrast to the initial melodic section. 'Sunshine Superman', not the Donovan track, is a through composed piece that contains some great unison lines and solos from Ducret on guitar and Tranberg on trumpet, who both manage to get 'outside' the compositions, although Bruun's strict and mathematical sounding rhythm does its best to lay a solid foundation but due to its shifting emphasis creates an ideal pattern for the improvised content. Peter Bruun's slow drumming, full of displaced micro-beats and de-emphasising the naturally stronger ones, a la Mark Guiliana, is the star of 'Extended Mind', whilst the album finishes with 'Is That So Sir Names?', a bubbling and nervous piece that stops and starts by interrupting the flow with clever changes in time, irregular phrases, and skittering sounds, before gradually driving into a groove with some great chromatic lead work from Ducret. What's really nice to hear on this album is the different set of colours coming from the palette of the synths, and although they may not be to everyone's taste they are used with discretion and tastefulness, which really gives the music a different aural sheen.

Overall, the music on this album is well written and arranged, with clearly composed and strict structures in place. However, more importantly the music on Vernacular Avant-Garde contains enough flexibility to take advantage of the musicians in the band, their own creativity and what they can offer to the music that really brings these pieces alive, full credit to Peter Bruun.