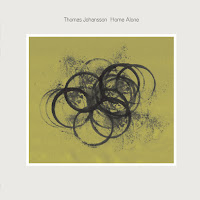 How can you release a convincing solo trumpet album after so many outstanding ones by Bill Dixon, Wadada Leo Smith, Peter Evans, Nate Wooley, and - recently - Susana Santos Silva (just to name a few)? What could be possible obstacles? For example, Stuart Broomer has identified a certain problem of the trumpet in recent jazz because of “its inflexibility of sound and articulation in relationship to reed instruments“, which has brought forth “dogmatically studied players or players who find an original voice by shying away from the trumpet’s sheer brassiness and its richest tradition.“ Norwegian trumpet player and composer Thomas Johansson is certainly not one of them. He has decided to pull together many traditions and innovations on his solo debut Home Alone, stripping his music down to his trumpet/flugelhorn plus some extended materials. From the very beginning one can hear that he’s an artist in full command of his instrument, something he has already proven in other contexts, e.g. in bands like Cortex or All Included. Obviously, he’s also not interested in the arbitrariness of improvisation, in the redundancy of improvising over a chorus, in letting himself just go. Johansson is a player who tries to unite both the tradition of free improvisation and the compositional means of new classical music (especially repetitive structures and modulations), which brings him close to his colleagues Wooley and Evans, who have managed to merge trumpet identity with musicality and the advancement of means of instant compositing.

While Evans’s trumpet influences are hard to pigeonhole (in interviews he said that he was rather inspired by the sound of saxophonists like Wayne Shorter and albums like Captain Beefheart’s Trout Mask Replica, e.g.) and Wooley admires the early Wynton Marsalis releases , Johansson’s music swings back and forth between elegant, melodic lines in the style of Bill Dixon and Wadada Leo Smith, for example in “Monologue“ and “Lines for Mathilde“. The first being a stylish trumpet ballad, presenting blurred passages as well as clear lines and shiny counterpoints, the latter track just keeps swinging very easily - it’s even reminiscent of Miles Davis’s cool jazz period (also, “Bucket“ sounds like a homage to “Round Midnight“). In contrast to these tracks there are pieces like “A Fistful of Density“, with its hectic rush and excitement, its sibilants, the procession of shaky riffs, and the super-sharp staccatos zigzagging through the room, and “Fractures“, a miniature full of painful, gagged, and muffled sounds.

Thomas Johansson’s trumpet is all the things that superficial music isn’t: spirited, shapely, sensual. It sums up adventurous trumpet solo music of the past 60 years. But the ten tracks on this album are more than that. Johansson’s playing is much about physicality, a solo trumpet performance which is corporeal in the best sense - and convincing.

Home Alone is available on vinyl and as a download.