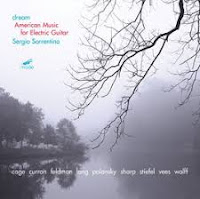 With the electric guitar having mainly been developed as an instrument in the United States, it seems appropriate that we have collection of modern classical pieces written by American composers for the instrument in this new album by the classical guitarist Sergio Sorrentino. The album includes pieces by the likes of John Cage, Morton Feldman, Christian Wolff, and Alvin Curran to name a few, although not all the pieces were originally written for guitar some have quite a historical tale to tell.

In 1966 the composer/performer, Christian Wolff, asked his friend and fellow composer Morton Feldman if he would write a piece for electric guitar. Feldman duly obliged and the piece, written in his own hand, was given to Christian Wolff, who played it publically a few times before it was stolen from his car along with his guitar. Wolff had never made a copy and used to keep the manuscript of the piece in his guitar case, the unwitting burglar completely unaware of the importance of this piece of handwritten manuscript probably ditched it before selling on the guitar – the real aim of his/her desires. Having been the sole copy, the piece was lost and the anecdotal story telling has turned this event into a contemporary music fable that has only made people wonder over the years about the loss of this valuable musical artefact. Fast forward 40 years, and a recording of Christian Wolff playing the piece was found in the archives of a Berkeley radio station, which was then transcribed from the recording by guitarist Seth Josel. The piece, ‘The Possibility of a New Work for Electric Guitar’ is included on this album, arguably the most important work here. It sounds like classic Feldman, with it’s quiet and sparse tones and tremolo arm glissando’s, which remind me of a nineties recording (funnily enough also on Mode) of Cage’s ‘Ryoanji’. Having originally ‘lost’ this piece, Wolff set about putting things right with the world by composing a ‘replacement’, ‘Another Possibility’ for electric guitar, which is the longest and last track on this album. Sorrentino colours the different parts of this piece by ‘sectionalising’ it with different effects, which I’m not convinced entirely works, and isn’t in the original score. Wolff’s other piece for the instrument, ‘Going West’ is also part of the set and is a very beautiful and angular, through-composed melody, which is notated across three staves thereby making the performer filter or choose what is possible to play.

Other works, such as John Cage’s ‘Dream’, although originally written for piano is not much more than a single line melody with a few chords and sustained tones, which works really well on guitar having been arranged by Sorrentino himself. This is a simple but reflective piece with its confident plainsong-like charm, and is the track that opens the album. ‘Rose of Beans’, by Alvin Curran, is an excerpt from a larger piece for mixed ensemble, the fragment recorded here being a minimalistic exercise in motivic development, but one that works rather well. Elliott Sharp’s ‘Mare Undarum’ is a type of graphic score, so the recording we hear is essentially a guided improvisation, with some wonderful sounds such as tapped harmonics, percussive striking of strings, bottleneck slide, bell-like tones and an overall crispness to the sound that makes for a thoroughly colourful piece. ‘Alpha Aloha’ is written by Jack Vees, someone I hadn’t heard of, which is always nice, and changes the sound of the guitar by electronically processing the sound and generating a timbre that sits somewhere between a brass ensemble and a cathedral organ. Disappointing is David Lang’s ‘Warmth’, a piece for two guitars, which ends up sounding like one guitar with an uncompromising delay effect on it. I have heard a different version of this piece with the sound of the guitars having more overdrive on them, the gritty-ness and sustain of this effect seemingly makes the piece work slightly better. There is also Larry Polansky’s ‘An Unhappy Set of Coincidences’, an additive piece for guitar and bass and ‘Urutora-man’, a homage to the Japanese Composer Toru Takemitsu, by Van Stiefel, and probably the most idiomatic ‘classical’ sounding piece on the album.

There is an austerity to the sound of some of the pieces on this album, and it is these pieces that give the overall set a consistency of sound amongst the diversity of composers that have been assembled here. Obviously Cage, Wolff and Feldman sit together quite comfortably, but also the selection of less well-known repertoire such as ‘Alpha Aloha’ (Jack Vees) and ‘Urutora-man’ (Van Stiefel) help to create an overall mood, as well as bringing newer work to the public’s attention. An enjoyable and educational set of pieces for a lesser utilised instrument within the ‘seriousness’ of the concert hall.