The last day of this year’s festival was dedicated to Polish/Swedish electroacoustic composer Zbigniew Karkowski, the project was called "The Truth at all costs?“ It was a heart’s desire of Karina Mertin, Louis Rastig’s co- organizer of the festival, to pay tribute to the late noise legend. According to Karkowski everything is vibration. He claimed that every form of vibration was the driving force of the universe, which is why he described human existence in frequencies, waves, relationships and intensities. His model consists of only one element, offering a lot of space for noise. The project’s intention was to find that out together - with lots of such noise, feedback and vibration. 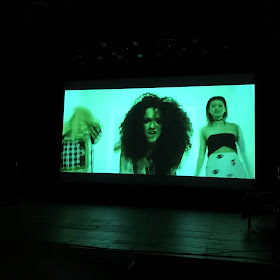 The day started with a series of videos by Theo Burt from his ongoing Remixes project. Videos by Bebe Rexcha, Calvin Harris feat. Rihanna, Beyonce and others were fed automatically through a mathematical process, collapsing the structure and time of sound and image. Echoes of the original material were there but hardly recognizable after the processing. The last two videos presented were Neon Jungle’s Braveheart, one in Burt’s typical alienated version, a high-pitched, looped noise sculpture reminiscent of Tim Hecker soundscapes on speed. The final one was a slow version, which revealed his approach. It was like watching Christopher Nolans' Memento. At the end of the video you could see the original one in his vulgar, cheesy, commercial reality. By revealing the truth behind his art Burt also answers the question how you could create a piece of sophisticated art on the basis of a commercial product. As it turned out it should be my favorite performance of the day.

The second act, Jessop & Co., were completely unknown to me. The duo consists of Anupal Adhikary and Subho Sen S., both from Kolkata, India. They work “with music and sound to explore questions of ethnicity, regionality, shared urbanity and its existential dilemmas, crises, and provocation“ (according to the liner notes of the festival). It was the duo’s European premiere, in fact it’s the first time that they have left Asia. Standing there behind their machines, the two looked like they were working in the control room of a huge waste incinerating plant, depicting a sonic environment full of crackles, tinkering, rattling and drones. They shifted musical patterns very slowly, piling up different layers of sounds just to come back to the original crackles, which they carved out again and again. This electronic debris was the glue that hold everything together. A very interesting set, the only thing that didn’t fit was the heat (which was as brutal as on the first day). The music would have worked much better, if it had been played on a frosty winter day.

When Massimo Pupillo (bass, electronics), Stefano Pilia (guitar, electronics) and video artist Lillevan hit the stage, everyone expected an apocalyptic noise orgy. Particularly Pupillo is notorious for his violent approach in his work with Zu, Thurston Moore, Mats Gustafsson, Caspar Brötzmann, and Stephen O' Malley (to name only a few). However, the three were the surprise of the day: Their music was very harmonic and accessible, it was reminiscent of ambient easy listening techno, as if Fennesz was jamming with Ryiuchi Sakamoto. Twice one might think that the set could switch to a darker, more brutal and harsher atmosphere, but these were only brief moments. The most emotional passage was a vocal part which echoed Dead Can Dance, it was ten minutes of sheer beauty. What was more, Lillevan’s video fit excellently to the music, he played with colors very gently and complemented the music perfectly. Who says that noise has to be dissonant?

Next up was Klein, an artist I was really looking forward to. The South London electronic musician has just released an EP called cc, on which she creates music like the drum’n’bass background scores/melodies but without the typical drum’n’bass beats. Her music is complex and exuberant with conflicting emotions. It’s a fascinating work that explores the emotional depths of life, death, and growing up. Unfortunately, her performance on the festival was rather disappointing. The first part, where Klein was supported by two musicians playing the flute and the violin, was able to tie in with her album, referring to similar musical and thematical aspects, but then she lost focus. The video sequences were repeated constantly, her vocals were poor and her dance performance was embarrassing, quoting Madonna’s vogueing period of the early nineties. Especially compared to the shows before it seemed really uninspired.

The day was closed by Wanda Group, the moniker for the UK based experimental musician Louis Johnstone, who created spooky landscapes of buzz saw sounds, hiss and distortion. He has established a special kind of musique concrète aesthetic by stitching together tape spaghetti noise, minimal loops and a beat, which is there, but very much under the surface. His set was monotonous, yet full of intimate details. Unlike Klein, Wanda Group’s approach perfectly fit into Karkowski’s idea of noise, it was a consequent and logical finale of the day.

So, what remains of A´Larmé! VI ? It certainly is the most heterogeneous of all “improv“ festivals, which is why you can question whether you can pigeonhole it at all. The focus on electroacoustic music has never been so strong before, which is a double-edged sword. On the one hand Louis Rastig’s concept attracts a very diverse audience, on the classic festivals like Unlimited! in Wels, Jazzwerkstatt in Peitz or Vision Festival in New York (to name just a few) you neither see as many young people nor as many women. On the other hand the rather traditional free jazz acts were more enthusiastically celebrated by the people (that was at least my impression) and the last day was poorly attended. Very subjectively, I’d like to have it a bit more traditional, my favorite day was the third one, but I also enjoyed Large Unit Rio and Gordoa/Malfon/Edwards/Narvesen a lot. What distinguishes the festival from others is Rastig’s creative and focused curating, in all the festivals over the years there has been some kind of plan. And I like his announcements, they are a performance of their own. I hope he and Karina Mertin can put together A’Larmé VII next year. However, if I can suggest one thing: What about air conditioning?
Paul on Sunday, August 05, 2018
Share