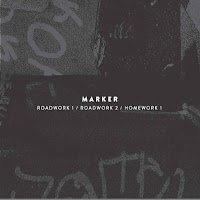 Readers of FJB that happens to sort releases by grade might know that I gave Marker’s debut a five-star review, (and it was so well-deserved). They might also remember what my reasons were. My personal preference for albums that first gives me a comforting feeling, often derived from a beat, a melody, a theme, a motif, a phrase – something that I believe the giants in the record label industry calls “a hook” – and secondly is followed by the experience of disaster, of walls tumbling down, of bridges burning of chaos and mayhem, is something I happen to like. A lot. What I call disaster or describe as 'walls come tumbling down', is often the freedom of improvisation in a very intense and straight forward way.

Jaimie Branch’s ‘Fly or Die’ did it, Fire’s ‘Hands’ as well, just to pick two albums I reviewed here, but there’s of course many more. I’m certain that readers of this blog accept it and even have respect for the fact that I, as part of the Free Jazz Collective – admit to often fall in love with albums that presents these “features.”

Marker is reedist Ken Vandermark's group with guitarists Andrew Clinkman and Steve Marquette – the former being a young and very talented artist with many cool projects running; Cowboy Band and a solo album release, both work checking out – and the seasoned Marquette (Check out “The Few” just to mention one group Marquette is involved with), Macie Stewart on keyboard and violin, and finally Phil Suddenberg on drums. Stewart plays in the Chicago based duo “OHMME” together with Sima Cunningham and has a new release coming this August. Chicago based drummer Sudderberg can be heard in different settings across genres. With rock bands such as ‘Wei Zhongle’ and ‘Spirits Having Fun’, and in a variety of jazz collaborations with Keefe Jackson, Eli Namay and Jacob Wick – just to mention a few.

Marker’s follow up release to their praised debut (‘Wired for sound’) is a box set of three albums all recorded during their January/February tour this year. We’re invited to hear what has happened since their debut, and between the first, second and third concert hear how they progress and change around the material in different ways. And here’s where I went from wow to huh to what and back to wow again. I had to reach out to Mr Vandermark directly to ask a couple of questions.

At first, I embarrassingly didn’t catch it – I was just enjoying what I heard was a band melting together, learning, giving, taking and presenting their ideas in such a way that I just felt grateful to be able to be a tiny observer of the process of a great band becoming an even greater band. But then, it of course was right there, right in front of me. In the intro of the second album’s first track; ‘Shunpike’ I heard a theme used in ‘Doctors in the shot’ on their debut album (around 12:40 into the song). But it was a much better fit in this new release. And it kept on happening. Pieces, phrases, themes – whatever you want to call them – started to appear on Roadwork 1 / Roadwork 2 / Homework 1, but just put in better, or perhaps just different, places beautifully blended with improvisational work of the entire group. I obsessively started to listen back and forth between albums to compare and try to get an understanding of the how and the why.

In the end I wanted to turn to the master himself to ask why this modular approach was so important for the group, or rather why some parts were reused but surrounded by newly composed material. Was the debut not “good enough” for the material to just be locked in there forever?


“Though the individual compositions I've written for Marker are specific, the way they are organized is modular. The pieces titled on 'Wired For Sound' are in a sense ”suites” of material whose order is completely flexible. This is done so each concert is completely different than the others, so that it forces the musicians to truly improvise and problem solve at each performance since the through line from composition to composition in a "suite" is always changing. There can be no "single right answer" to the musical questions posed by the material since the material is always shifting. The music on 'Wired For Sound' is only one version of how the pieces can flow. This is why the release of 'Roadwork 1, Roadwork 2, and Homework 1' is important, because it illustrates how this structural methodology works through the performances themselves.”

It's such a satisfying response and brings me to an “Ah, of course” moment. But even though there’s flexibility in the way the performances are ‘built’, the fact of the matter is that I hear a five-star group delivering another five-star release, but with modules being “better” put together. Where the debut album is fantastic because it took me by surprise and held on to it throughout the entire album, the live performances heard on this triple-album gets to me because the band manages to move around parts familiar to me into completely new contexts with also an obvious level-up in group performance. Another good example is how Gard Nilssen’s Acoustic Unity took the ‘Firehouse’ material to another level on their triple live album ; not only by adding additional musicians but also by capturing the fire and glow from a rock solid live performance.

Vandermark confirms some of these thoughts as well:


But the material on the boxset is further documentation of Marker's creative process, and highlights how the composed elements can be utilized, shifted and re-ordered, and how those factors can affect the improvising. So, on one hand, the compositions and the concept behind the organizational principles for the material are the same as on 'Wired For Sound'. But on the other, their very nature means that on the macro level the composition/improvisation relationships can always be different, which is why the material is used differently on all four albums. One way of thinking about it is that it's similar to the principle of montage in film. Shot A next to shot B next to shot C can result in a very different meaning than shot B>shot A>shot C, even though the shots themselves are exactly the same.

And, of course, the performances on the Roadwork and Homework albums also illustrate how further rehearsals and concerts, particularly touring and playing each night, accelerated the growth of the band after the recording of 'Wired For Sound' was made. This process of creative growth continued and led up to the recording of the new material in the middle of July. As long as this continues the band will be in action!

I’d like to finish this review by commenting on perhaps the most important part; the development of Marker – the band. Where Wired for Sound felt fresh, youthful and surprising in so many aspects, this triple live album is a spectacular snapshot of how this group has progressed together – and is progressing together. A very interesting example can be found reading Vandermark’s Instagram. On February 12 he explains how, in the studio, Marquette and Clinkman were positioned next to each other – yet the guitars are panned left and right –, while being on stage they’re on opposite ends of the stage to be able to deliver the same “stereo” sound for the audience. The band found a solution that allowed the guitarists to be physically together but soundstage apart. It’s an isolated story that is crucial to how we experience the sound of Marker. I do understand that the social media landscape can be another task to be done by musicians that doesn’t really have the time to do it – but I personally really enjoy reading it, and Vandermark paints the picture really well. It reminds me of Patti Smith who’s doing the same great job in combining picture and text for us to see – for free!

Anyway, the groups musical development on their new release is evident. On‘Accordéon’ they are staring down the abyss just like Mats Gustafsson’s Fire, combining a very heavy pulsating groove with fiery improvisation. Another emotion which must be balanced perfectly to not become a cliché, but they pull it off perfectly! On ‘French Dress’ I think Sudderberg brings his performance up at least one level, again together with the band and on ‘B Eiga’ the group performance is fantastically tight. The album ends but I want more!

I’m very pleased to be living in an age where I can follow the development of a group like Marker like I am, release by release combined with the social media experience. I wholeheartedly recommend that you do too.