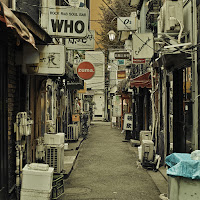 
For those living under a rock that are unfamiliar with Akira Sakata’s work (or any of the musicians involved in this recording for that matter), he is a product of Japan’s 1960’s jazz scene. Sakata has worked with just about everyone of consequence, including but not limited to: Brötzmann, McPhee, Zorn, Sharrock, Bennik, Schoof, Drake, Laswell, Gustafsson, Nilssen-Love, Vandermark, Yoshihide; the list really does go on. This album finds him working with the veteran rhythm section Chikamorachi, consisting of Darin Gray and Chris Corsano, as well as free pianist Masahiko Satoh. Darin Gray is one of the great under-appreciated and supple bassists in all of music. A longtime associate of Jim O’Rourke, he lends his talents to groups such as the Dazzling Killmen, You Fantastic!, and On Fillmore as well as his solo endeavors and recent work with Mars Williams and Tyler Damon. Chris Corsano, while not as seasoned as Sakata or Satoh, has been just about as prolific in his relatively short time on the scene. He is one of the most truly gifted and in-demand improvisers in music. A small subset of his collaborators includes Paul Flaherty, Joe McPhee, Bill Nace, Mette Rasmussen, Michael Flowers, Evan Parker, Nels Cline, and C. Spencer Yeh. Masahiko Satoh was also a denizen of the 60’s Tokyo scene, and has worked with many of the same people as Sakata, although oddly enough this is their first recorded collaboration, and what a standout piece of work it is.

‘Proton Pump’ starts off with a brief solo statement by Sakata after which the rest of the group simultaneously drops in. Corsano’s drums shuffle along with Gray’s pizzicato bass playing while Satoh delivers animated, bouncing chords. The quartet reaches a frantic crescendo around the 5 minute mark when suddenly everything drops out but the piano. Satoh and Corsano then get busy working percussive concepts; the rolling drums and clamoring piano dance and converge, simmering to a halt before Sakata reenters the dialogue. The piano and saxophone then engage in a highly detailed exchange. The playing is thrilling here as the intensity level rises and falls, finding the players manically weaving strands of melody into their dissonance. At around 12 minutes the rhythm section returns and the energy levels absolutely explode, yielding a powerful close to the track. ‘Bullet Apoptosis’ starts with high pitched clarinet notes rising over a sparkling piano figure and a bowed bass drone. The drums rattle to life as the performance coalesces into a steady stream of clairvoyant interaction. Sakata is both fierce and sentimental on the clarinet, floating abstractions on the rhythmic concoction provided by the remainder of the quartet. Sakata then withdraws and Chikamorachi and Satoh engage in an active improvisation that peaks over a several minutes with Sakata re-emerging to provide the spark that burns through to the conclusion.

The colorfully named ‘Chemiosmotic Coupling of Acorn’ is the real gem of this collection. Tinkling metallic noises and bowed cymbal set the track into motion, joined shortly by Satoh’s damped piano notes and Sakata’s wheezing vocalizations. As the track gradually increases in intensity so does Sakata’s dialog; growing more guttural and menacing, like an irate Oni charging from the demon gate. This section concludes with Sakata bursting into an almost scat-like articulation as the music plateaus. Around the 9-minute mark the rhythm section fades out, leaving Sakata and Satoh to dual in the empty space. The sax/piano dialogue blazes at a furious rate for several minutes at which point Chikamorachi rejoins. At this cue Sakata goes into frenzy, his sax wailing and screaming over the clamor. The intensity persists to the end of the track, the quartet now molten lava flowing down the volcano, unstoppable, destroying all in their path. It’s absolutely breathtaking. The final piece, ‘Voyage of Eukaryote’, is the most refined and cohesive of the collection. Sakata returns to his clarinet for a spirited spot of near conventional jazz expression with the quartet. The piece abstractedly hints at tinges of New Orleans street music, but played with such enthusiasm and intensity that it feels as if it may disintegrate at any moment. It’s a masterfully fitting end to a tremendous album.

As I sit here trying to collect my thoughts after experiencing this blast furnace of an album, I’m reminded of the words of poet W.H. Auden, “The most exciting rhythms seem unexpected and complex, the most beautiful melodies simple and inevitable.” The combination of these elements here makes this album a home run for this reviewer, as it is both structurally complex and viscerally thrilling. It’s rare that an album of this intensity is so thoroughly listenable and engaging. This is wonderful, rapturous music that expertly combines the controlled rhythmic explorations of contemporary free improvisation with the ecstatic lyricism and expression of 60’s and 70’s free jazz, very highly recommended.