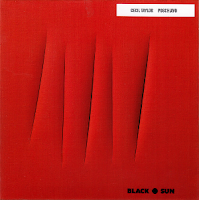 Cecil Taylor began his solo piano concerts in 1967. In June that year he played ‘Carmen with Rings’ at the Concertgebouw in Amsterdam and a mesmerised Alexander von Schlippenbach was in the audience; “I could breathe air from another planet” Schlippenbach later observed, alluding to the soprano’s words in the last movement of Schönberg’s second string quartet (1908), announcing the dissolution of tonality. For him it was an event of similar magnitude, a point of no return, and he followed Taylor to the De Doelen Concert Hall in Rotterdam two days later where Taylor’s first solo recording – of the same piece – was made by Dutch radio, a continuous performance of just under an hour, unprecedented in the jazz world and an indication of what was to come. Praxis (Praxis, 1982) from Italy the following year is 75 minutes long. Taylor’s audacious displays of tigerish pianism eventually became the stuff of legend, all-engulfing feats of dexterity and stamina that left audience members open-mouthed, though for some more admired than liked. The critic Gary Giddins considered that Taylor had “reinvented the piano recital” and even his detractors showed begrudging respect, one grumbling that they should just give him a medal and send him home. This album is an uninterrupted performance of some 54 minutes from Poschiavo, Switzerland during the Uncool Festival in May 1999, captured in excellent sound by RSI Network Two. Taylor plays his favoured instrument, a Bösendorfer Imperial, a piano especially sensitive to key pressure with a wide dynamic range, and additional notes in the bass register, first encountered on Air Above Mountains <Buildings Within> (Enja, 1978) and featured in some of his finest recitals: Fly! Fly! Fly! Fly! Fly! (MPS, 1981), Garden (Hat Hut, 1982), and For Olim (Soul Note, 1987).

Taylor never pretended his music was easy and expected audiences to prepare themselves in a similar fashion to himself: “I’m difficult because I don’t want anything else except absolute art”. Although his music comes from many places, transhistorical and cross-cultural, it can only really be appreciated on its own terms, and irrespective of familiarity, taking in the myriad levels of his mighty edifices remains a challenge. According to Giddins, negotiating the sheer length of Taylor’s performances is the most difficult Rubicon to cross. I’ve written previously about the common articulations, or tropes (an extension of the earlier “unit structures”) that characterise much of his music and furnished Taylor with a loose method for organising his thoughts, a collection of underlying archetypes that generate and give an inner coherence to his swirling configurations. The core harmonic elements were drawn from a repository of root chords and their inversions, some derived from alternative scales he’d been writing since the conservatoire. They were eventually set out in the charts that accompanied him onstage (possibly no more than an aide-mémoire): groups of notes in letter notation in which the horizontal and vertical axes correspond respectively to pitch and sequence, including lines of demarcation and connection, and some scribbled comments. These modules and intervallic relations, merged with Taylor’s rhythmic and textural formations, together provided his chords, cells, motifs, and characteristic dictions: the basic blocks from which he built, dismantled and reassembled during his improvisations, perhaps emulating the spacial dynamics of steel spans and the other architectural constructions which fascinated him. As Taylor put it to Giddins: “Notation can be used as a point of reference, but notation does not indicate music, it indicates a direction”.

And Taylor’s music is suffused with directed motion, reflecting his lifelong interest in dance. There are no straight correspondences between the movements of the body in space and Taylor’s vocabulary; it’s more about the patterns of tension and release that propel his music, figures and chords sprung across the keyboard which give it a singular potency, or swing, a quality Taylor regarded as fundamental to the jazz that originally inspired him even though the similarities to Ellington, Erroll Garner and Monk might seem only fleeting, such as his use of dotted rhythms and blues colourings. It went deeper than metre or mannerisms and was embodied in the flux and flow of different kinds of energy and the friction between them. Around the years of this performance there was a noticeable change in that energy as Taylor’s playing became less athletic, possibly due to age but also the sort of distilled focus which accrues over time. Rather than the accumulation of layers of increasing intensity, forward momentum is frequently checked by counterbalancing movement, there’s a reduced density so that his phrases have extra time to breathe with a more nuanced attention to internal rhythms and accent shifts, greater melodic richness, and a lighter touch that can spill over into impish humour. The refinement of Taylor’s “organisational palette” (his term) continued with his solo and duo work into the next century, such that by the time of his Kyoto Prize performances in 2013 the music had been released from the weight of gravity and become almost translucent, irradiated from within.

In this recital, as with his music generally, there is no all-embracing narrative, no destination to the journey, one of the reasons why coming to terms with the duration of Taylor’s performances can be problematic: listening for something which is absent. There is a different kind of continuity – one which Taylor shares with certain minimalist music, though in all other respects they couldn’t be more different – and as trumpeter Stephen Haynes, who worked in Taylor’s Orchestra Humane has said: “stories are being told”. Taylor unfolds a series of tableaux made up from his recurring rhetorical modes, a regenerative process in which a polytextural pool of ideas cross-fertilise, stretching and shrinking time according to some alternative metric. I’ve a feeling Japanese theatre and various ritual ceremonies, and the experience of time that goes with them may in part have been an inspiration – over the years Taylor absorbed a vast range of cultural influences in a variety of media in his search for traces of things ancient and universal.

A rippling, arpeggiated structure in triplets gradually became central to Taylor’s thinking, a pervasive presence frequently played with parallel hands sometimes in contrary motion. It forms a nucleus around which other musical elements revolve and can even be seen as shaped by his conception of primordial regions and their relationship to the keyboard. Almost always the motion starts in the middle register (what Taylor thought of as the earth) and often extends outwards, down into the three octaves below middle C (the abyss) or into the upper range (the astral), sometimes rounded off like a question or assertion, triggering what he described as a “plurality of exchange between different voices”, each occupying a distinct location with its own discrete inflection. The arpeggio can be razor-sharp, answered by stonking bass notes or glassy pecks in the treble, reduced to ascending and descending blocks of chords, or undulate across the keyboard like tendrils.

In Poschiavo the audience was treated to the whole panoply, by turns expansive, mercurial, grandiose, and graceful. Taylor opens by sounding out his instrument with broken, scampering runs setting the piano’s frame in motion as the ripples proliferate. He closes some 50 minutes later pulverising the keyboard with his palms, including what sounds like a forearm smash, and as the waves subside a final swell is picked out in glittering notes at the top end. If there is a unifying factor that runs through the performance and these sweeping ranges of timbre and dynamic, it is how Taylor’s discourse subtly balances and fuses apparent opposites: formal versus flexible, stylised but spontaneous, tactile and cerebral, a domain of constant transformation which is nevertheless cyclic. The arpeggiated figure is organic in shape and growth, swaying and swirling like a tree, but it’s recurrence is a stabilising force bearing a structural weight as a point of return, repose, and renewal. We hear a spectrum of textures, enriched by their mosaic-like juxtaposition – pulsating vibrancy cross-cut with hard-edge contours – yet also fine gradations and elegant shading. There are passages where Taylor floods musical space with billowing resonance and white-hot accelerations, savouring those extra keys on the Bösendorfer and creating an amorphous harmonic haze. Other times, he delivers lines of exquisite clarity having a firm tonal centre. There’s intense then rhapsodic as cascading cluster splashes evolve into song-like figurations, and back again. It might be said that Taylor’s music is inclusively inconclusive, wide-ranging but always provisional, consisting of dialogues between ultimately incommensurate voices, exchanges that cannot be fully concluded. For him, relations are never static or resolved; instead they are pregnant with endless, intoxicating possibilities. There is no purpose to be divined other than the process itself, and as listeners we’re asked to do something more than listen – to participate in a flourishing ecosystem that recreates in its own terms the passions, deliberations and precarious balances that make up the very substance of our lives and the world about us. And that takes time.

As often the case, at one point Taylor is moved to chant. These shamanesque incantations, usually brief, seem to spring from an impulse that he’s reached a point where he must call on spirits to guide him, and in context they sound convincing, as if his music is a vessel that gives voice to forces beyond, Taylor animating their emergence into his musical universe so that we can indeed breathe air from another planet.

There is of course, no one ‘correct’ way to listen to a concert such as this, or single key that will unlock what lies within – “I avoid the easy trap of definition” Taylor remarked – one of the reasons his music retains an essential sense of mystery and remains so compelling, elusive yet exuberantly full. Taylor himself must have been aware of just how much he packed into each performance, the consequence of rigorous practice and the unique geometry of his imagination, thinking and rethinking through not just his material but omnipresent currents that flow, divide and bind. “Once you get over the dynamism of his hands and fingers” wrote critic Alex Ross, “you feel the dynamism of his mind”. Hopefully, there will be more releases from Taylor’s final decades which so far have been sparsely documented, including his work with large ensembles that contain some of his most exhilarating music. Recommended, with a handshake.