Japanese, New York-based electronics player Ikue Mori  (she uses only her laptop) is an exceptional collaborator. She enriches any musical meeting, thoroughly composed or totally improvised, with her remarkable sensitivity and highly personal aesthetics. No other electronics player sounds like her and no one has collaborated with so many distinct musicians like her. Her recent collaborations with Japanese pianist Satoko Fujii and Danish sound artist Christian Rønn emphasize her idiosyncratic sonic language. 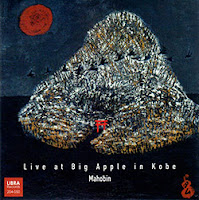 Mahobin is a new group from the prolific pianist Sakoto Fujii and its debut album documents the first ever performance (actually, the second set of this performance) at the Big Apple club in Fujii’s new hometown, Kobe. The quartet features Fujii on the piano, her partner, trumpeter Natsuki Tamura, Mori on electronics, and Danish sax player Lotte Anker. These four musicians shared the same stage for the first time on February 2018, but all have collaborated with each other before. Fujii hosted Mori during her residency at New York’s The Stone in 2013, and Fujii and Anker joined Mori during her residency at The Stone in 2016. In 2017 Anker toured with Fujii and Tamura in Japan.

Mori recorded last year with Fujii, Tamura and trumpeter Wadada Leo Smith the album Aspiration (Libra, 2017) and recorded with Anker and pianist Sylvie Courvoisier the album Alien Huddle (Intakt, 2008) and participated in Anker’s What River Is This (Ilk Music, 2014). So it was only a matter of time before Fujii would ask all to participate in another of her Kanreki (還暦), her 60th birthday celebrations projects. Moti suggested the group’s name, Mahōbin (魔法瓶), a thermos in everyday Japanese, but the literal meaning of the ideographic characters mean magic bottle.

And Mahobin does offer many kinds of hot magic, sustainable adventures and wicked games and spices, all spontaneously improvised. The title of the first, 42-minutes “Rainbow Elephant” is another pun, this time on a famous Japanese brand of thermos bottles, Zōjirushi (象印, literally: elephant brand). This intense improvisation is the most free-formed piece Fujii has ever played, at times even abstract one filled with enigmatic silences. But “Rainbow Elephant” flows with a natural ease, with no attempt to gravitate towards any pulse or a clear narrative, but with a truly democratic interplay. Mori’s sparkling electronics extend the extended breathing techniques of Anker and Tamura and resonate Fujii’s prepared piano timbres. There is no redundant note or sound in Anker’s playing and she sound as navigating calmly the busy commotion, saving all from diving into unnecessary pits. Mid-piece Fujii intensifies its dramatic progression and towards its end she weaves a beautiful melodic undercurrent to the abstract interplay and concludes it with a touching coda. Throughout the many, sudden sonic detours, the four musicians never lose sight of the big picture and always introduce more delicate nuances and subtle colors to its overall, fluid texture. The second, shorter “Yellow Sky” sketches a darker texture, full of restless, claustrophobic tension. Anker again sounds as leading the conflictual interplay and with few gestures marks the contours and the spirit of this wild sonic journey.

Magic did happen on that night and now it is bottled in this great album, the eight in Fujii's Kanreki celebration. 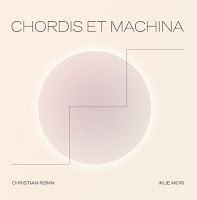 Danish, Copenhagen-based composer-sound artist Christian Rønn is known from his electronic and organ improvisations as well as from his solo project Ganga. He has collaborated before with Anker, minimalist American composer Rhys Chatham, and singer-songwriter-poet Ingrid Chavez. His duo with Mori was recorded in Stockholm, but later they kept refining the basic tracks at their respective homes in New York and Copenhagen. Chordis et Machina is released as a limited-edition of 300 vinyls by Rønn’s label Nische Records, together with San Francisco’s Resipiscent Records and Copenhagen’s Tonometer.

Both allow “Beyond the Forest” to dance around a twisted, fragmented pulse until its otherworldly groove is lost in a thick forest of out-of-tune, sudden sounds. “Loch Ness” follows the elusive character of the imaginary creature and suggests a fragile and cryptic cinematic soundscape. “Primordial Chaos” floats between dissonant-resonant piano hammering and its subtle, electronic reflections, sketching a nuanced, labyrinthine texture where sparse sounds are mirrored, shaped and morphed into newer, weirder ones. “The Path” surprises with its innocent, joyful spirit before its loose groove of white noises spirals and leaps into deep space.

Great review, the record is available in the U.S. from http://resipiscent.com/artist/view/50
and in the E.U. from https://nische.bandcamp.com/album/chordis-et-machina