My first realization that the 1970s was an unusual time for jazz came when I discovered Pablo Records. I had just started listening to and collecting jazz recordings, and at the time CDs were expensive and records were really really really cheap, so I picked up a lot of them. One was Dizzy’s Big Four with Dizzy Gillespie, Ray Brown, Joe Pass, and Mickey Roker (check out the first track, Frelimo, this one killed me). Why, I thought, were these heavyweights on what seemed, to me, a indie label? Having no idea of the history or the personalities, I assumed it was because jazz had fallen out of favor and was being dropped, from what I considered at the time, to be the major labels. (To give you some context, please understand, this was the late 80s, the internet was in its Gopher stage, and no one I knew told me otherwise.) Over the years I’ve of course learned that the real story is much more complex. Regardless, I think it is safe to say that the era does occupy a special place in jazz history, and a number of recent releases excavating and re-examining the era have come out recently. 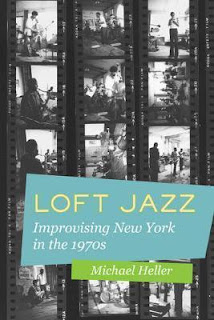 The 'Loft Jazz' era in New York City is nearly mythic. Obviously, it's real, it happened, and there are survivors, but it has become something of legend, marking a time in the life of the city that is long gone. Researcher and author Michael Heller takes a serious and methodical approach to his study of the era, which makes sense as it had its roots in his doctoral dissertation. In this slim, dense volume, he explores the conditions that created the loft scene using overlapping frameworks to view and analyze the rich source materials he’s collected. Essentially, it was a time when opportunities to play were scant and labels weren't interested in boundary pushing music any longer, but rents were cheap in Manhattan, so musicians seized the opportunity to create their own ecosystem, and the creativity exploded.

Throughout the book, Heller is quite aware of the mythology and his own assumptions, and in good ethnographic fashion, documents it carefully. For the most part, he eschews deep dives into particular artists or their catalogs and offers a history of the scene from its early points with Ornette Coleman’s loft on Spring Street and the reaction to the Newport Jazz Festival's move to New York in the early part of the decade, to the scenes ultimate disintegration under the pressure of gentrification and development. The backbone of his research is the curation work that he partook in with the bassist Juma Sultan on the creation of his archive (www.jumasarchive.org), and when he gets into the chapter speaking about this work, he does describe the music from the players as they pertain to the archive. For example, he discusses how Sonny Simmons and Sultan’s work and music had intertwined and leads the reader through their music. This part is as nicely written and descriptive as his earlier analysis of communities, spaces, pay, and politics. His primary sources are excellent as well. In one passage, pianist Cooper-Moore remarks how much of his time, during the loft era, was actually spent trying to keep the loft building running!

So, the loft scene has passed into the history of jazz kind of like Woodstock did for rock (and Juma Sultan was a part of both, as Jimi Hendrix’s bassist), and Heller's book can be read nearly as a how-to manual for constructing a vibrant musical scene. It's an examination of a treasure trove of archival materials and primary source interviews, and a smart read. 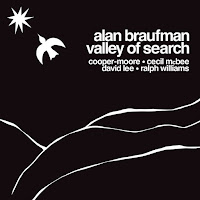 Valley of Search is a re-release of an India Navigation record from 1975, and it was born from the very loft that Cooper-Moore mentioned above: 501 Canal St. Released under saxophonist Alan Braufman’s name, who was also a resident in the building (which according to Clifford Allen’s excellent line notes cost $140 a month per floor - let that sink in for a moment), the album is a savory time-capsule. The loft was home to a number of Boston (from Berkeley) transplants, such as saxophonist Dave S. Ware, with whom Cooper-Moore played with in Apogee. The band on Valley of Search is Alan Braufman on saxophone, Cooper-Moore on piano, dulcimer, and recitation, Cecil McBee on bass, David Lee on drums, and Ralph Williams on percussion.

The music is fun and genuine, and there is a pure joy of playing and exploring together that captures the ethos of the time and the spirit of the loft scene. When Cooper-Moore recites the Bahá’í prayer in “Chant,” it is like a perfectly crafted prompt to transport you to a more innocent and exciting time (oh crap, there is that mythologizing again). Leading up to the chant is the short ecstatic track “Rainbow Warriors” which sets the stage for the woolly album that follows. On the follow-up “Thankfulness”, we hear the first theme of the album, which along with the figures on “Ark of Salvation” and “Little Nabil’s March”, provide a solid foundation for the recording. The splashy cymbals and insistent pulse of Cooper-Moore’s piano drive the music along, and on “Love Is For Real”, Braufman digs in with intensity, delivering a stunning solo over the colorful impulse of the piano, and a little too-eager athletic whistle. McBee is featured on “Miracles”, on which he delivers an intricate pizzicato solo. “Little Nabil’s March's” however, with it’s Ayler-esque martial theme and exuberant delivery is the hit, and the closing “Destiny” offers a lovely, accessible and aching melody.

This re-release was made possible by Braufman's nephew, Nabil Ayers, the namesake of "Little Nabil's March". His recollections of 501 Canal St. recently appeared in the New York Times and captures the atmosphere of the loft in wonderful non-varnished detail. From the decrepit steps to the plastic sheets in the window to jamming with his uncle, Ayer's article gives this re-release some proper context:

"So 501 Canal existed in quiet isolation in the midst of one of the biggest, most vital cities in the world. This was, and will always be, my New York. And in fall 1974, this is where Alan Braufman recorded his debut album, “Valley of Search,” a free jazz offering that embodies the city during this time."

Be sure to check out Ayer's piece and enjoy the music. Overall, a very welcome re-discovery! 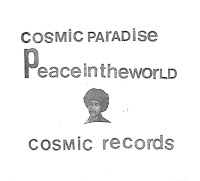 While the folks at 501 Canal St. left for New York, there was a still world of music being made in Boston. This triple CD release from Now Again records, re-issues what were only private press releases. The work of twin brothers, Phill Musra and Michael Cosmic, are searching spiritual recordings that breath with passion and earnest intensity. Finding inspiration in the likes of Coltrane, Ayler, and Pharaoh Sanders, their music was loose, but with an ear tuned into the zeitgeist. Two of the three albums re-released here are Michael Cosmic's Peace in the World and Phill Musra Group's Creator Spaces. The brothers were also a part of the World Experience Orchestra, a collective out of Boston whose own private press albums were considered to be something of a holy grail to collectors (they were re-released by Now-Again a few years ago as well). The third CD is a track from the WEO, however the 1972 concert recording precedes the brothers' involvement.

The first disc, Cosmic's Peace in the World, kicks off with "Arabia", which also makes an appearance on the Musra Group recording. The depth of the sax, basically in conversation with the piano, is pretty grabbing. The following title track features a wrenching bass solo and suspenseful piano work. 'Space on Space' would seem to be this album's hit - its repetitive and punchy melody serves as a base for some tough soloing. Of these two efforts, this is the more 'polished' one, but as you may imagine, both have a wonderful DIY spirit and free approach.

On Creator Spaces, Musra wears his heart on his sleeve with song likes "The Creator is So Far Out" and "Egypt". The music follows the spiritual jazz modal template and it's at times a bit gangly. The title track is pretty free blowing, with simultaneously intense sax work and a rousing drum solo, even though the primitive organ playing is a bit jarring at times. Overall, he recording contains some excellent and intense playing.

Aside from the exploratory, non-commercial nature of the recordings, also connecting both this release with Valley of Search is the involvement of jazz historian and writer Clifford Allen who contributed thoughtful and well researched line notes for both recordings.
Paul on Friday, August 17, 2018
Share