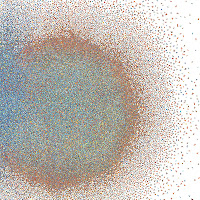 It’s a common enough event, a group of accomplished improvisers and experimental artists get together to make uncommonly excellent music. In this instance, the collective (now performing as Yunohana Variations) consists of YoshimiO, Susie Ibarra, and Robert Aiki Aubrey Lowe. All three have a rich history of making experimental music with each other and other notables, but Flower of Sulphur marks the first time they performed together as a trio.


Recorded live at Roulette in Brooklyn, New York, in December 2016, Flower of Sulphur documents an hour-long improvisation, with YoshimiO on drums and vocals, Ibarra on drums and percussion, and Lowe on electronics and vocals. There’s a noticeable balance in the way YoshimiO and Ibarra complement each other’s percussive styles, Lowe and YoshimiO’s vocals blend and/or clash sympathetically, and Ibarra and Lowe ring vivid resonances from various percussion and electronic effects. The overall sound lands somewhere at the intersection of free improvisation and noise, interwoven with echoes of trance, ambient, and rock.


“Aaa” begins in a ceremonial vein, with bells, toms, and whole tones calling the room to attention, focusing the energy to a fine point that’s first drawn out by Lowe. All three excel in explorations of space and time, and the gradual blossoming of “Aaa” provides plenty of room for the trio to bend and warp both. “Bbb” features a dramatic, searching solo from Lowe, as he takes various ideas and pushes them up against one another. YoshimiO and Ibarra riff on his rhythms and ideas, before shifting into a percussion-centric middle section. As “Bbb” fades out, “Ccc” rapidly builds in intensity, before morphing into an extended wordless vocals feature. “Ddd” again begins moving in one direction before shifting dramatically in tone and rhythm. After a rock-influenced opener, drums completely fall away around the 10-minute mark. Lowe and YoshimiO perform a brief vocal duet that also signals the final stage of the performance. A counterpart to the opening, the final section of “Ddd” has an equally cosmic, reverent vibe with lovely, almost yearning, vocals. Yunohana Variations has been touring this year, so I hope we’ll see a follow-up album from them very soon.