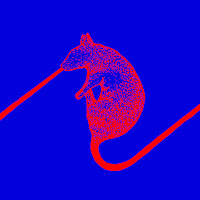 
In the hinterland between West Africa and a New York loft, The Dwarfs Of East Agouza dwell. Forging their sound in the fires of psychedelia, free jazz/improv, and electronic music, their’s is a strange song. Dissonant synthesiser loops and stabbing free-guitar work clash on Rats Don’t Eat Synthesisers’s two book-length tracks. Two tracks that are as arresting and violent musically as the works of Burroughs are literarily.

The title track’s introductory groove, a loop of hand percussion and synthesisers, lays down the pathway for the snarling lead guitar to walk. Angry as a hornet-nest, the sound tears at the consciousness. Leaving claw marks and stings in its wake. The atonal clusters of notes sound akin to Robert Quine’s - of Richard Hell And The Voidoids - playing. And by coupling that most experimentally NYC of sounds with the Africa-tinged rhythm, The Dwarfs Of East Agouza have placed one foot in the New World and one in the cradle of evolution. The third foot stomps on the cosmos.

While the groove remains steady and constant, the lead guitar varies its cacophonous riffs at sonic-speed. Firing through them after only three or four repeats of each ostinato. Listening to the seemingly thoughtless spitting of notes feels like looking for patterns in a sandstorm. But by digging through the shifting dunes, a buried temple reveals itself. And inside are chambers upon chambers of musical knowledge to discover.

As the synthesised groove drops out, the guitar’s final flurries of riffs also give way to shots of sound: trebly clangs and electronic thumps against a descending bassline. And for the final five seconds there is only silence as the sandstorm’s dust settles down.

“Ringa Mask Koshari,” dominates Rats Don’t Eat Synthesisers’s run-time. Before the synth’s shimmering entrance, the nebulous guitar chords and noises set an ominous tone. As if a Lovecraftian monstrosity lurked in the shadows. To herald the beat the synthesiser takes on a harsher, more processed sound. With nothing organic or lifelike about it, it instead revels in its unidentifiable fakery. Rolling in the mud of its unknown alien world.

The beat moves from vicious to berserk, sitting at the crossroads of satanic invocation and brutalist dance music. After almost 15 minutes of battering-ram intensity, the beat recedes back into the chaotic waters it appeared from. Like Sun Ra at his most transcendent/inscrutable, Rats Don’t Eat Synthesisers ends at a high-noon apex. And The Dwarfs Of East Agouza stake a claim to their territory that is the newfound, unexplored hinterland.