Violinist-vocalist Biliana Voutchkova is an experimental artist who spans the widest possible range of sound and movement. The Berlin-based, Bulgarian musician-composer-improviser, who has worked with innovative contemporary orchestras as Ensemble Modern and Zeitkratzer, keeps extending her sonic, physical and technical capacities, evolving into a highly individual musical language. 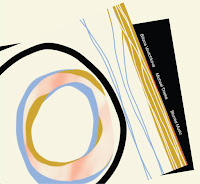 Very few free-improvisers have such a passionate advocate as iconic art-rock vocalist and sound artist David Sylvian. Last year he did the artwork for an album by Voutchkova, German clarinetist Michael Thieke (from the duo The International Nothing and the group The Pitch), and Irish Roy Carroll who plays on electro-acoustic media, As Found (Sound Anatomy, 2017). But Sylvian's enthusiasm for the music of Voutchkova and Thieke continued and he asked Erstwhile Records’ Jon Abbey to release more music of this duo. Eventually, Abbey’s wife, photographer-designer-producer Yuko Zama, decided to found her own label, Elsewhere Records, and to release a triple-album of Voutchkova and Thieke live performances as the first statement of her label. Sylvian did again the artwork.

Voutchkova and Thieke have been working together since 2011, both collaborate in Berlin’s Splitter Orchestra, and the duo released a limited-edition (170 copies) debut album, the live Already There (Flexion, 2013). Blurred Music offers a deeper, more detailed and varied insights into their rich and intimate aesthetics. Voutchkova and Thieke create intentionally a blur; improvised parts alternate with fields of pre-structured material in which digital recordings of the duo are duplicated by live performance. Virtually identical fragments of the live performance synchronize simultaneously with the playback, unavoidably giving rise to blur in the temporal dimension, in the rhythmic, timbral, and motivic variations, and in the microtonal interpretation of individual pitches. The live portion of the duplicated material is still improvised, but within a framework purposefully restricted by the pre-recorded material, the intervals between which are indeterminate. To the listener’s perception, what is being composed in real time blurs into what has been structured in advance; the difference can be registered only after an interval, if at all.

These complex compositional and improvisational strategies become insignificant when listening to Blurred Music. You can either trust Sylvain's refined taste or simply surrender to the magnificent sonic universes of Voutchkova and Thieke. Soon enough you may find yourself drawn again and again to their addictive duets, wishing for more and always discovering new nuances and ideas. Voutchkova and Thieke offer an arresting journey through sounds and sounds within sounds, increasing their and ours, the listeners, sensitivity of perception. Their sonic explorations are sketched with quiet intensity, reserved but passionate dynamics, adventurous, inventive spirit and austere beauty. Both carefully deconstructs the conventional, sonic spectrum of their instruments into subtle particles that flow organically, creating a completely new language on their own, somewhere between tonality and atonality.

Each of the three performances, all recorded within nine days on December 2016, has its own distinct atmosphere. The “Chicago”, recorded at Carr Chapel, begins with a restless tone poem but soon Voutchkova and Thieke develop a gentle, compassionate intimacy, courting and teasing each other with intriguing, dissonant sounds. Often Theike’s ethereal multiphonics merge into Voutchkova’s soft overtones and suggest a vibrant, sonorous texture. Surprisingly, the duo even spices its busy conversation with fragments of folk songs and elements of contemporary chamber music. “Philadelphia”, captured in Aux Performance Space, uses the resonant hall beautifully to weave patiently layers upon layers of sustained sounds, floating and flowing majestically in space. This piece alternates freely between a quiet and highly disciplined drone soundscape, stressing the microtonal precision of Voutchkova and Thieke interplay, and a lively, tense and open conversation between the two. “New York”, recorded at Experimental Intermedia, is the most complex one, shifting constantly from a meditative, chamber texture to a searching, restless mode, still, a playful one; then to a static drone entity that gently vibrates with microtonal waves; and to an intimate, inventive talk between old comrades and again to a contemplative and berathy, almost silent texture before concluding this engaging saga with Voutchkova and Thieke singing a beautiful melody that allow these two kindred souls to dance around each other and sing-play-chant-meditate in their very own expressive language. 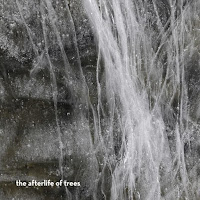 These four improvisers form a left-of-center string quartet, as all apply extended bowing techniques and Mayas employs preparations and objects on the piano strings and only briefly plays the piano keys. The music sounds at first patient and emphatic. The quartet develops slowly the title-piece as a quiet, dreamy drone where all the conventional string instruments and the prepared piano blend into a close, almost tangible sonic entity, and all together often sound as a low-frequency electric hum. Slowly, more nuanced, fleeting colors and distant percussive noises are added to this minimalist, dark texture. The following pieces are shorter and offer more intense and urgent textures, still comprised by minimalist gestures but manage to suggest detailed, mysterious atmospheres. “Elective Affinities” even introduce exotic, Eastern ideas with very few ritualistic, percussive sounds.