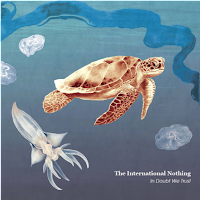 
For 18 years now The International Nothing, a Berlin-based psycho-acoustic clarinet duo consisting of Michael Thieke and Kai Fagaschinski, have been dealing with silence and how to fill it. John Cage once said that silence was a state of consciousness and that it had nothing to do with the absence of sound in a certain space because there is no such thing as absolute silence. The reason was that we lived in an urban space which was full of sound (even in a dead room we hear the sound of our heartbeat, our blood circulation, our nervous system).

The International Nothing fill this space with their multilayered sound sculptures using multiphonics, beat frequencies, scratching, clapping of the keys, microtonal shifts and dark drones. All these elements are integral parts of their musical syntax.

Both musicians are well known as improvisers in Berlin’s prolific Echtzeit scene, but in this project all you hear is two clarinets (Fagaschinski on the right channel, Thieke on the left) – no overdubs, no electronic manipulation and no improvisation! In Doubt We Trust is a through-composed piece of art.
Additionally, if it comes to sound, dynamics seem to be important to Fagaschinski and Thieke: the pulse of the sounds, the crescendo and decrescendo in the room, the overlapping of voices, volume, timbre, the same notes with a different focus and harmonics. As to the structure the music doesn’t have a real beginning or end, it’s process-like. The composition’s not an object which is the sum of its single parts, it’s a continually moving complex unit.

In Doubt We Trust, a 37:37 pulsating, shivering, quicksilvery wave of muted clarinet noises, creates liquid sound columns, you can hear the breathing, the very nature of the production of music. Just recently a group of scientists found out that bowhead whales serenade each other with improvisations from a vast repertoire of song. The diversity and variability in these songs are rivaled only by a few species of songbirds, their songs are complex musical phrases that are not genetically hard-wired but must be learned. I imagine the sounds of The International Nothing quite close to those of these fantastic animals.

So, close your windows, pull down the shades, imagine you’re under water and experience this wonderful trip of tone and timbre.

In Doubt We Trust is available as a CD and a download, a vinyl release will follow with some delay.

You can listen to the complete album and buy it here: