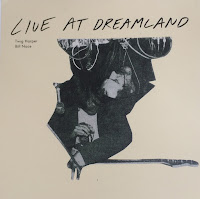 Live at Dreamland is a writhing, oozing, viscous specimen of electronic free improvisation by two of the Northeast-US’s true maestros. I first became aware of guitarist Bill Nace through his Vampire Belt collaboration with Chris Corsano. YouTube videos of their early shows prompted me to mail-order their first two self-produced CDRs and I’ve been a fan of their post-Blue Humans style clamor ever since. Besides Vampire Belt (and various Vampire Belt + 1 configurations), Nace has worked with a diverse cast of talent ranging from his collaborations with the Italian psych jazz powerhouse Jooklo Duo to Body/Head, to his free guitar duo with Kim Gordon, to his collaboration with the poet and writer Charles Plymell on Apocalypse Rose. He also runs Open Mouth Records, which has released fantastic music in ultra-limited editions for well over a decade now. Contemporary psychonaut Twig Harper (formerly of Nautical Almanac) is originally from the same 90's noise/total music scene that produced Wolf Eyes and Andrew W.K. among others. Following his relocation to West Baltimore he established Tarantula Hill which hosts local bands and serves as the headquarters for his isolation tank business. If you’re not familiar with Harper’s work, his Intuitive American Esoterica trilogy is a great place to start. The two men toured together last year, this record being a documentation of their performance at Louisville’s sadly-since-closed Dreamland venue (recorded by the most-affable Tim Barnes).

The piece begins with a swelling tape loop over which percussive noises and disembodied moans intermingle. Bowed guitar joins as the vocalizations intensify and are stretched out and modulated via Harper’s homemade electronics into an impenetrable kaleidoscope of sound. About half way through the first side the piece slows and becomes more introspective, alternating between drone and silence. Nace then goes in a more direct path, providing metallic popping noises and string scrapes. Harper runs eerie swells over which his electronics jot out their weird logic. Low tones close the first side over a wash of tape delay and feedback. The second half finds our heroes beginning with what sounds like tape loops of breaking glass being eaten by the tape machine. Shaking bells create a ritualistic vibe over which Harper pushes the delay feedback into the red. All of this action throws up a miasma of residual sounds that builds up into a din before succeeding into a section of contemplative drone and scattered echoing horrors. The guitar scrapings coalesce with the specters that Harper has conjured, whirring and humming into silence. Harper provides aftershocks in the form of several jarring electronic spasms, bringing the set to a close.

Harper and Nace are an interesting pairing given their respective sound palettes, and it’s a little hard to discern who is doing what on this recording at times but that’s not really important. What is important is that it’s a nicely done, well recorded album that documents an interesting coupling of musicians, performing in a fantastic venue, during its final days. RIP Dreamland, you are sorely missed.