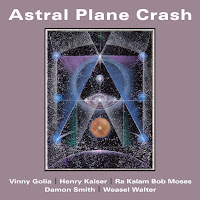 Kaiser chose Smith and Walter, commenting that both know that “music is created in dimensions far beyond melody, harmony, and rhythm”. The Plane Crash trio released two albums so far, Plane Crash (ugExplode, 2009) and Plane Crash Two (New Atlantis, 2015), The Astral Plane Crash quintet introduces two highly experienced improvisers - multi-reedist Vinny Golia and jazz drummer Ra-Kalam Bob Moses. Kaiser and Smith have collaborated before with Golia but it was their first musical meeting with Moses. Golia brought to the to Astral Plane Crash recording session - conducted on April, 2018, in Quincy, Massachusetts - a wide range of woodwind instruments, including an Egyptian flute - kawala,, multiplying the timbral variety of the core trio. Moses anchored the dynamic interplay of the quintet with great sensitivity and clear rhythmic patterns.

Astral Plane Crash offers two epic, collective improvisations. The first, 44-minutes of “Fountain of Dreams” begins like a fiery free jazz improvisation, with Moses suggesting a loose, rolling pulse while Golia articulates the dark atmospheres with his earthy baritone sax, but suddenly the original Plane Crash trio erupts and offers an alternative course, fast, thorny and restless that refuses to settle on any form, pulse or narrative. When these two contrasting courses merge all five musicians sketch an open, supportive interplay that swings between Golia’s dominant, singing tone and Kaiser’s challenging, sharp and dissonant attacks. Moses and Weasel attempt to balance these poles by weaving powerful rhythmic layers while Smith aligns with Kaiser and intensifies the tension with his bowed, amplified double bass. Kaiser introduces the second, 35-minutes of the aptly-titled “Mysterious Journey” with a contemplative, acoustic solo guitar that later interacts gently with Golia’s folk flute, innocent melodies and the light percussive contributions of Moses and Walter.

When Kaiser switches to the electric guitar and Golia takes the soprano sax the interplay becomes tougher and packed with nervous density, but soars fast into cosmic-psychedelic atmospheres and burns with the percolating pulses of Moses and Walter. Astral Plane Crash comes with a 12-page booklet featuring the artwork of Kaiser’s inspiring hero and artistic influence, San Francisco-based, artist-filmmaker Jordan Belson’ series “Death and Transfiguration” (2003), as a mystical visual counterpart to the cosmic mindscapes of this recording. Kaiser writes that Belson’s “films’ imagery was exactly like my dreams… only clouds of light and patterns in space. Synesthetically, I see this same sort of imagery when I listen to and when I play music”. And he adds: “playing music for me is largely an internally visual experience… I'm drifting through glowing clouds of light among coruscating fractal and geometric forms that shimmer in and out of existence… It's pretty much like I have a Jordan Belson movie running inside my head all the time”. No doubt, Astral Plane Crash is a pretty wild experience.

For sale from the label.