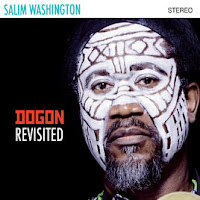 Salim Washington has been around for some time, but, it seems has only recorded a handful of records. He used to play weekly gigs at St. Nick’s in Harlem, though the shuttering of that venue as well as Washington’s own relocation to South Africa to take up a teaching position at the University of KwaZulu-Natal put the kibosh on that. One particularly powerful performance was captured by CIMPoL a decade ago. Apart from that and a few other albums primarily as leader, Washington has been sparse in his recording output. That fact makes this album all the more impressive.

With an all-star rhythm section of Tyshawn Sorey and Hilliard Greene as well as the violist and vocalist Melanie Dyer (also featured on the CIMPoL release) on three tracks, Washington has produced a record of immense value. It harks back to the free bop of the 1970s. This may come as little surprise as the title is a take on Julius Hemphill’s 1972 classic Dogon A.D.. On the first track, “To Know Yahweh,” Washington plays a muscular sax over a swinging, hard-bop rhythm. The second track, “New Invasion of Africa,” involves soft, atmospheric mbira melodies that intermingle with Sorey’s intricate, jungle-styled drumming. On top of this, Dyer reads Amiri Baraka’s biting 2011 poem “New Invasion of Africa,” an unequivocal condemnation of neo-colonialism and military interventionism first and foremost in Libya. The shortest piece on the album, this track is key to unlocking the potency of Dogon Revisited. It is rooted in tradition but is also nuanced and new. It looks to the past, but to critique its legacies. Take it as an inspired musical homage or a charged political statement about the contemporary. Either way, it works.

Indeed, this is not a throwback album. It is a testament to continuity and the continued relevance of decades-old musical forms. The rest of the album elaborates this bent. Track three is a smoky, bluesy number. On the following track, Washington picks up his oboe for a three-way dialog that would have fit perfectly in a mid-1970’s loft in New York City, but is somehow still contemporary. The fifth song, “Jamila,” is one of the standouts. Washington’s flute fluctuates between spacious, modal improvisation and hard-bop groove. The ever-resourceful Sorey adopts a more abstract and active approach than on previous tracks. Greene’s playing, meanwhile, is variegated, vigorous, and utterly compelling. The next few cuts, including the simultaneously free and sultry “Self-Love_Revolutionary Ontology,” likewise have one foot in Hemphill’s 1970s and one in Washington’s 2018. “Dogon A.D.”, of course, is a case in point. It may not be surprising, but this track is a masterful rendition of Hemphill’s composition. All four musicians take part to create the tightest, most powerful piece on the album.

Dogon, Revisited is a surprisingly effective release. I say “surprisingly” not because of the artists who perform – all already incredibly accomplished musicians - but because I tend to reach for much older recordings when I search for this type of music. This album, however, strikes a fine balance between reverence and relevance. In a time when the post-Cold War order seems to be unraveling, Washington refers us back to a time when the post-Second World War order seemed to be imploding. He reminds us that the struggles of the past continue, as do the musical expressions of those struggles. And, he cautions that just as we periodically forget our past and are caught off-guard when its legacies confront us, the avant-garde – here, the American and Pan-African(?) avant-garde - periodically needs to revisit its predecessors lest it become too myopic, distant, and, ultimately, out of touch with the contemporary world. If that is indeed what Dyer, Greene, Sorey, and Washington are getting at, cheers to them. And if not, this is still an album well worth picking up.