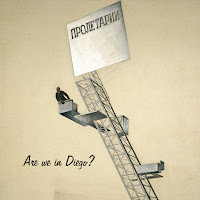 Are we in Diego? presents a performance of the late British trombonist Paul Rutherford, reedsman Ken Vandermark, bassist Torsten Müller, and drummer Dylan van der Schyff at the Ironworks in Vancouver, Canada on December 10, 2004. According to the liner notes, the title is a reference to Rutherford’s eagerness to get to the next tour spot; excitedly asking ‘Are we in ____ yet?’ when he sensed they were approaching their destination. Likewise, the song titles and artwork are based on some of the group’s favorite Rutherford-ian adages and precepts. The album is dedicated to Rutherford, who passed away in 2007. He was a founding father and pillar of the European free improvisation scene, playing with Derek Bailey, John Stevens, Trevor Watts, Barry Guy, Evan Parker, et al in the Spontaneous Music Ensemble in addition to the various Iskra combos with Bailey, Guy, and Parker. In addition to his collaborations, his own pioneering works for solo trombone must be heard to be believed (if you haven’t heard The Gentle Harm of the Bourgeoisie, you owe it to yourself to find it and have a listen).

The set starts off with Morning Star, a 20 minute monolith that serves as the nucleus of this live set. It starts off sympathetically, with the musicians shaking off the winter chill and warming their instruments with animated, steady discourse. Rutherford’s trombone playing is utterly distinct, playing his instrument as an extension of his body. He is in fantastic form here, providing beautiful glissandos, low honks, growls, and circus-like sound effects. Vandermark starts with his clarinet and then progresses to saxophone at around the midpoint, providing both birdsong and fire to the proceedings. Müller’s bass playing is at times percussive, deep, and playful; the perfect foil for van der Schyff’s percussive avalanches and bowed metal tone poetry. Are We in Diego Yet? follows with a spacious, exploratory structure that remains low key through the first half, but is none-the-less utterly engaging. The interchanges become more intricate just past the halfway marker, with the horns rising in intensity over van der Schyff and Müller’s animated rhythms. Venceremos is a short, fiery improvisation that finds Vandermark delivering a sermon of altissimo glossolalia over the turbulent percussion and honking trombone. Dinsdale is even shorter and more intense with Vandermark and van der Schyff’s in a duel utilizing high intensity lines over powerful rolling percussion. Bis Spater closes the album with an even-shorter-still improvisation between Rutherford, Müller, and van der Schyff.

This set finds Rutherford in good company, playing the music he loved to an audience appreciative of his art. It’s a fitting tribute and a marvelous album besides. In Derek Bailey’s biography he tells Ben Watson that "The mysterious one to me at that time was Rutherford. He could produce genuine surprises. If anybody at that point qualified to be called a free player, it was Paul."