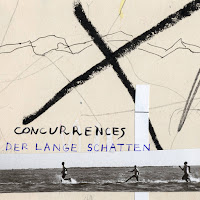 When you listen to a trio that consists of clarinet, piano and bass you can’t avoid thinking of the legendary Jimmy Giuffre 3 with Paul Bley and Steve Swallow, and milestones like Fusion, Thesis and Free Fall. However, Der Lange Schatten (German for “the long shadow“), featuring Michael Thieke on clarinet, Håvard Wiik on piano, and Antonio Borghini on bass doesn’t only focus on the jazz tradition on their second album. There are several references to our present, and not just as to the music. One of the tracks is called “Post Truth and Pre Desaster“, another one they named “Stendhal Syndromes“ (the Stendhal syndrome is a psychosomatic disorder caused by cultural stimulus satiation) - all of them phenomena we have to deal with nowadays.

Concurrences is also a programmatic title, since improvisation and pre-conceived material concur indeed. Although most of the music is composed on Concurrences, there are improvised parts as well. On the one hand, Der lange Schatten display a strong sense for compositional form, motives are unfolded, explored and transformed, often slowly and patiently like in “Serenata Maledetta“, the opening piece, sometimes joyous, swinging and concise like in “And Then He Dances“. On the other hand, they develop their communication spontaneously and gradually, for example in the last part of “Drunk Octopus Wants To Fight“. Like subliminal currents, contrasting textures rough up a mildly undulating sea. The beauty of this music comes from the friction between these approaches, and none of the musicians retreats to the comfortable position of mere accompaniment. Improvisation is always collective on this album, even if all musicians use the same rhythmic and harmonic raw material. The above-mentioned “Stendhal Syndromes“ is a perfect example of this. The first two minutes seem to be a complete chaos between hectic piano sketches, growling bass, and flaring clarinet runs before the piece takes a completely different direction. In a calm sequence the musicians set only small marks here and there, they explore microtonal areas, but then the piece becomes a swelling wave before it finally breaks. One of the trio’s specialties is their dense and dark sound, it changes and evolves constantly, a true shapeshifter.

In “Leaps of Faith“ Borghini’s versatile, warm, and imaginative bass dances around Thieke’s wide melodic clarinet arches, while the piano swings and refers not only to Paul Bley (Wiik is also part of a trio called Free Fall) but also to Bill Evans. In a mysterious way, the musicians always keep order, there is no chaos or arbitrariness, the music never goes astray, no matter how nimbly their fingers flutter over keys and bridge. Sometimes the music suddenly falls from a dominating, hammering piano ostinato into a slow two-tone clarinet melody, as if a tranquilliser reveals its full effect. There’s always a latent excitement left, a shimmering under the surface, a stimulus that cannot be completely erased and which sooner or later will reappear. Recommended, and not only for fans of chamber music jazz.

Concurrences is available as a CD and as a download.