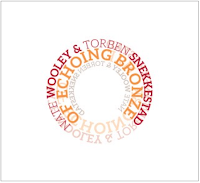 On July 5, 2015, two of the most forward-thinking horn-players met at the KoncertKirken – Blågårds Plads in Copenhagen, Denmark. The first one is Nate Wooley, the prolific and omnipresent trumpet-player from New York, the other is equally progressive Norwegian saxophonist Torben Snekkestad, who is also a member of the Danish Saxophone Quartet, a classical ensemble. On this album is also plays reed-trumpet, a hybrid instrument consisting of a trumpet with a sax mouthpiece.

The encounter between both musicians is a very organic dialogue of sonic discovery, sometimes confrontational, sometimes coagulating in a common lyricism. The sound can go in all directions, from abrasive staccato bursts to pure stretched tones, but the real fun is to hear the dynamics between both, the tempting approaches, the echoing of each others ideas, the creation of space and the building up of intensity.

Things becomes even more interesting on the second track, when they find a more solid rhythm of mesmerising repetitive sounds initially, evolving into more sparse sounds, possibly the "Breath Droplets" suggested by the piece's title, resulting in a strange and uncanny atmosphere. The third track repeats the repetitive concept with circular breathing on the reed-trumpet, laying the foundation for the deeper and darker single tone by Wooley, melting into a fragrance of deep yearning and sadness.

The album's overall result is one of intimate sound explorations, fragile, vulnerable and sensitive yet determined at the same time.