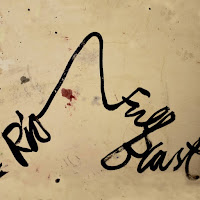 Recorded on the last date of a demanding 2016 South American tour, Rio is Full Blast’s 4th album (if you don’t count the 2 Full Blast & Friends records) and if you were hoping to see their gentler side this time around you’re going to be very disappointed. For the unedified, Full Blast is a thermonuclear reeds/bass/drums device consisting of Peter Brötzmann, Marino Pliakas, and Michael Wertmueller. True to their name they play like a force of nature, something substantial to be reckoned with akin to an aural tsunami. Pliakas and Wertmueller play as a single organism, the rattling/rumbling molten core is one of the key elements that make Full Blast’s sound work as well as it does. Their blistering tempest is well-suited to Brötzmann’s fiery playing and he joyfully supplies lightning slashes for their ominous thunderclouds, electrifying the proceedings with his pungent tenor squall.

Rio 1 jumps off instantly with Pliakas and Wertmueller following the lead of Brötzmann’s gruff war-horn. Pliakas’ bass lines are a blur of low rumbling tremors matching the frenetic intensity of Wertmueller’s drums. Brötzmann on tenor plays with his characteristic fervor; it’s amazing at his age that he is capable of so much energy. Wertmueller’s sound is absolutely impenetrable, blackening the sky with snare and kick drum clusters. Rio 2 starts with a rattling drum intro which is met at full force by the unyielding bassline and Brötzmann’s crowing tarogato (I think). The bass and drums build to an overwhelming swell, increasing in speed and power until the sound is absolutely punishing and physical, eliciting audible praises from the audience as they are besieged by the aural mayhem. Brötzmann unleashes yowling trills and growls, galvanized by the impassioned roar of the rhythm section and the audience’s howls of delight. Rio 3 begins with a two minute build up from Pliakas and Wertmueller before Brötzmann enters with rough clarinet shapes and reed squeal. The track ends in a dizzying two minute run from Pliakas and Wertmueller, who absolutely pummel the audience with their low frequency shock waves. On Rio 4, Brötzmann is back on the tenor, alternating curt staccato phrases with muscular baying in his thick vibrato until the song reaches a crescendo at the near the six & a half minute mark after which Pliakas and Wertmueller pick up speed with Brötzmann honking and yelping passionately over their din. Beginning with an intense percussive build-up, Rio 5 finds Brötzmann outlining the melody of Albert Ayler’s Prophecy on tenor. The bass playing sounds it’s most guitar-like here, with Pliakas utilizing his pedalboard to give his lines a searing hot edge. Brötzmann shifts back to clarinet and continues his sketches of roughhewn shapes through the undulating soundscape of the rhythm section. The album ends as abruptly as it began and the audience shows it’s appreciation with a riotous roar.

Rio is a visceral thrill, a powerful rush of sound that overwhelms the listener from the start, creating a sensory overload that only seems to accelerate and gain momentum. Brötzmann himself sounds fantastic and very much in his element, raw intensity never being something that has lacked from his work. His playing adds lyricism to the overall pummeling, and his utilization of different horns adds some sonic variety, as does Pliakas’ use of his pedalboard. The energy between the audience and the band here is excellent, each feeding off the other which drives the intensity up even further. The recording quality is amazing and does a great job of conveying this energy to the listener. I’d consider this a must have for Brötzmann fans and for fans of high energy music in general. A decidedly enjoyable listen, I recommend it at maximum volume.