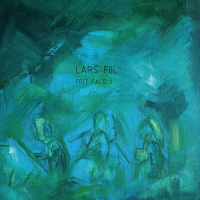 I have known Lars Fiil’s music for some time now. I reviewed his last release and was so impressed I invited him over to London to open the London Jazz Platform festival event, sponsored by Jazz Bites Radio, in 2017. His music is original, eclectic yet with an individual style which ramifies throughout which is all his own, connecting all the tracks even though their essence may vary. His music has been described as lyrical and intimate, which rightfully sums up his sound. He was nominated as New Name of the Year in Denmark and as a sideman in the highly popular indie-jazz outfit ́I Think You’re Awesome ́, Fiil has received praise for his dynamic and engaging style. In Frit Fald II (Free Fall II) the music is both thoughtful and profound. The release is a mix of live and recorded numbers and includes Raabjerg Kruse on saxophone and nay flutes, and Bjørn Heebøll on drums. The sound the trio create is intense, yet also searching, ever seeking the perfection which comes with truly creative improvisation. Sounds like bamboo tubes and bow strokes add a particular character and intricacy to the music. That it is more profound than his previous recordings is reflected in titles like ‘Hvem Er Du’ (Who Are You), ‘Statisk Uro’ (Static Unrest), ‘Apati og Dog’ (Maybe Apathy) and ‘Fredes Første Sang’ (Freds First Song) which is a tribute to the pianist’s son. Frit Fald II is here seeking meanings, allowing more fluidity than before – and it is even more engaging than the first album. There is unpredictability, daring and an insistence. The three musicians interact to create fluidity, a rapidity of movement and a more carefree atmosphere around and between each other. This is especially evident in the live recordings, where the interaction with the audience causes the improvisations to take unpredictable twist and turns. Frit Fald II is abstract, intimate and lyrical – with good doses of the untamed, the rebellious and unrestrained energy which characterizes lars Fiil’s take on music and playing.

‘Skygger’ opens the CD and is an atmospheric, beautiful piece with Lars allowing each note to fade out before the next in the opening section, creating an intensity using extended gaps and unexpected rhythmic diversions. Gentle, yet, you can sense the impending energy – which after 3 minutes begins to build with percussion and sax adding layers to the lyrical canvas set by the piano. It needs the full 7 minutes plus for the true essence of the track to be realised and the waves of sound which are revealed are astonishing, the sax quickening the pace, adding stut notes over the still gentle piano lines and the drums weaving dexterously between the other two. Confined to a CD, you realise that live, this could be pretty intense. The final minute or so takes on a controlled, more melodic tone. ‘Hvem Er Du’ is led by the sax, creating a sonorous line over the piano and drums before a step by step motion is created with all 3 players taking those steps both singly and together, eventually reaching a sort of musical plateau with varying interactions taking place. A lot is going on, yet it comes together beautifully around the sax lines. Wonderful.

‘Fredes Forst Sang’ is short, sweet and so gentle. The piano line is fluid, melodic and sings to the wilderness with tenderness and tranquility. ‘Alt Er Overgang’ leads out with a piano and sax discursive interlude before the percussion adds its own delicious over tones and describes around the other two in ever more intricate and embellished rhythm motifs. The final section is frenzied with all three players working in their own thoughts before it stops all too soon. ‘Apati Og Dog’ is a live recording and beautifully delivered, the crescendos and diminuendos adding a wave-like feel. At one point the other fade down to leave a wailing sax crying out over the almost feather like percussive touches from piano and drums, until deep notes from the piano wrap around like comforting enfolding arms. ‘Hvem Hvad’ starts with synced sax and drums before the piano adds its own line to the unfolding musical story. Then follows a beautiful section where the three musicians throw in unsynced, trickling lines, with the drums developing wicked little side rhythms, throwing the others not one bit. This track is really creative and develops more as each musician throws in another tempo, the others following. Beautiful improvisation. ‘ Statisk Uro’ is profound, atmospheric and creates a sense of timelessness, the music engulfing and enfolding the listener with its quiet yet insistent soundscape. This ends all too soon and is followed by ‘ Hvem Er Du’ again, this time a live recording with the piano maintaining the beautiful and atmospheric lines it creates in the opening whilst the sax goes manically off at tangents, yet remains anchored firmly to the key and tempo set.

The gorgeousness of this CD is second to none I have heard in the past few months and the interaction of the three musicians is palpable. Improvisation never had it so good and Lars is also learning the true value of silence with his extended pauses which add more than just a stop in the sound – they add their own value to the music. For all the frenetic activity there is also a profound gentleness to Lars’ music which so reflects his gentle and unassuming nature. His whispering touches have power behind them and the others read the music he creates so well. It is like you are hearing the essence of the players. A great CD and I would recommend any improviser to hear this.