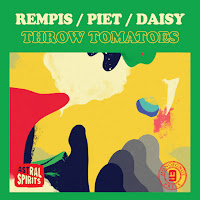 Last year, Dave Rempis, Matt Piet, and Tim Daisy debuted their new trio with Hit the Ground Running and Cure for the Quotidian, two excellent sessions that impressed several reviewers of this blog. Now they’re back with Throw Tomatoes, which features the group’s third and fourth shows together. Altogether, the three releases tell the story of less than a year’s worth of collaboration, improvisation, and inspiration. Beginning with Cure for the Quotidian, recorded November 9, 2016, continuing with Hit the Ground Running, January 21, 2017 (a pair of auspicious dates here in the States), and picking up with May 8 and July 2, 2017.

On “To Play Is the Thing,” recorded last May at Chicago’s Elastic Arts, Daisy opens with melodic cymbals, introducing and accompanying Piet. As we’ve discussed here numerous times, Daisy is a remarkably musical performer, with a style and approach that defies the personnel listing “drums” (just as Rempis is much more than “saxophones” and Piet beyond “piano”). Rempis enters a couple minutes in, and the three tackle a circular, pointillist interlude, with Piet employing some preparations.

It’s not just the name Matthew that brings to mind Shipp in Piet’s playing. There’s a similar depth to Piet’s approach to the piano as a complete instrument, with the full range of its keyboard and dynamics simultaneously deployed, as on his first solo section in “The Thousand Natural Shocks,” recorded at The Hungry Brain last July. Daisy is in a particularly driving mood on this date, shifting into a mellow swing at one point, before urging Rempis and Piet back into high gear. All three seem to be constantly supporting, poking, and prodding each other.

In the liner notes, Piet writes about a moment near the 20-minute mark of “To Play Is the Thing,” when he and Daisy tried to end the performance. Daisy adds some solid punctuation to Piet’s playing, but in context it does sound unfinished without Rempis. The proper ending is much weirder and more surprising, and therefore apt.

I mentioned to someone recently that Rempis has reached a new stage in his playing. Maybe it’s the modern horror show we’ve been cast in against our will, but I’d mark Perihelion as the point when something notable changed. For a saxophonist who always seemed capable of doing anything, Rempis now does absolutely everything. Throughout the album, Rempis plays with an open, fluid voice, which pairs well with Daisy’s resonant pitches and warm rhythms. And his sly references and unvarnished fury cut straight through Chicago’s thick night air.