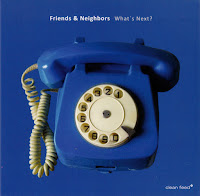 What’s Next is the fourth album from Norway’s Friends & Neighbors, the quintet of trumpet player Thomas Johansson, tenor sax/bass clarinet player André Roligheten, pianist Oscar Grönberg, bassist Jon Rune Strøm, and percussionist Tollef Østvang. Friends & Neighbors play what they regard as “. . . energetic and melodic free jazz inspired by musicians like Ornette Coleman, Archie Shepp. Pharoah Sanders, and John Carter.” And I have to say, if you have a particular affinity for that 70’s free jazz sound then you will highly enjoy this band. Each song has a theme that is generally reprised and/or modified throughout to ground the improvisations (i.e. archetypal 70’s head/improvisation/tail song structure with some variations). This works out well here because the melodies are infectious and the soloists are amazing musicians. Friends & Neighbors is a band whose releases I actively look forward to. On the surface it would appear that confining yourself to a specific sub-style would yield diminishing returns, but this hasn’t been the case with Friends & Neighbors. They have consistently released excellent music and What’s Next (following 2016’s What’s Wrong) is, I believe, their best album yet.

Influx begins with the horns stating an airy and dramatic melody over harmoniously essential cymbal shimmer, piano chords, and pizzicato bass line. This main theme is interposed with a brief but lovely interlude from the piano and rhythm section as the horns drop out. After this interval, the main theme is played once again and the song fades out. For WLB the band comes out swinging a jagged theme from the horns over the thumping piano and the plodding rhythm section. Roligheten takes his solo on tenor which is underpinned by the clatter of the rhythm section and sharply stabbed out piano chord accents. Johansson solos next as the rhythm section switches to a more bop style beat with a walking bassline. This is followed up by a raucous return to the theme to close out the song. Kubrick’s Rude begins with a lengthy, sophisticated, and bittersweet theme statement followed by a very nice solo from Grönberg (with some slightly audible vocalizations ala Alexander von Schlippenbach). Johansson and Roligheten follow this up with interplay and counter melodies, with just a bit of free play included for good measure, then return to the theme to close the song. Euro finds Roligheten on bass clarinet, with the band playing a staggered melody from which Rune Strøm breaks and solos wildly over measured horn bleats and drum/piano stabs. This transitions into an enthusiastic and manic solo from Grönberg which leads back into the theme.

You could just about guess the name of Reflection after hearing the main horn melody. This track is easy on the ears and contemplative similar to the opener, but this time with a brief interlude from Roligheten on tenor before restating the theme and fading out. Mozart, similar to WLB and Kubrick’s Rude, has an odd timing, giving it a kind of playful feel. This changes up as the song progresses into a more swinging refrain and some really nice horn and piano playing followed by the reprise of the main melody. Thorleif’s Blues is a fantastic number finding Roligheten back on bass clarinet divvying the great intro theme with Johansson as Rune Strøm adds some excellent arco accents. Johansson solos over the minimal but pointillist percussion of Østvang before a restatement and variations of the melody with Roligheten. Headway Heat closes the album with high energy bounce and a wild piano solo. Midway through the track Roligheten takes his solo on tenor and plays his most fiery of the set.

The sequencing of What’s Next is auspicious as it layers airy, contemplative numbers such as Influx and Remembering with sharper, more angular song forms like WLB and Mozart. This sweet-and-sour style of sequencing was used to great effect on the 70’s free jazz classic A Conference of Birds by the Dave Holland Quartet. It works now as it did then, testing the listener with tense and strange melodies before providing a brief respite with one of the gentler numbers. All in all it’s one of my favorites this year, a most welcome set from a terrific band.
Paul on Wednesday, November 21, 2018
Share