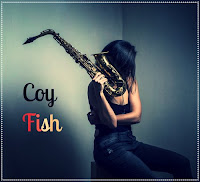 How nice it is to hear new artists and their very personal take on things. Sarah Marie Hughes is one of them, and her debut album is immediately a winner. Her tone on the alto is all her own, warm, granular in tone and deep. Her music is fully improvised with a very strong coherence and an equally personal approach, if only because it features Samuel Burt on daxophone, the bizarre instrument that is quite strong in copying the human voice. Daniel Ostrow plays bass and Nate Scheible drums.

The long first track is a real statement, a violent, modern outburst of raw expression, primarily driven by Scheible's powerful and relentless drumming, over which Hughes plays frantic and intense solos, accompanied by the almost human wails of Burt's daxophone. The piece is both uplifting and disconcerting. By itself worth the album.

The rest of the album is more intimate, less exuberant than the first track, and that's in fact a little bit of a shame. "The Addict", the very short second track is a clever collective recitation of a text: creative and only possible with various voices, yet it marks a change of sound for the rest of the album. The playing is nice, but it somehow lacks the power and intensity of the opening track, moving into more soft-spoken and meditative improvisations.

"Again", the long third track is a very open-textured piece with a relatively quiet yet intense rumbling rhythm section, creating space for Hughes' gentle alto, and the mood becomes even more meditative and calm with the fourth track.

As on the previous track, Ostrow's bass anchors the improvisation with spacious plucks on the strings, with Scheible adding little touches, as the backdrop for Hughes' pure-toned sensitive solo. The long "Sensitive Sensuality" does what the title claims: a long, almost bluesy, quiet piece that starts getting some intensity at the very end.

The overall sentiment is gentle and friendly, a kind of improvised cool jazz, laid-back, sensitive and warm. It's a nice debut album, with a very personal voice, both musically and on her instrument, but I really would have liked that some of the intensity of the first track could have been maintained or repeated in other places on the album.