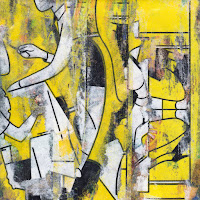 In yesterday’s interview, Tom Burris highlighted drummer Tyler Damon and rightfully praised him as one of the most promising musicians at the moment. His collaborations with guitarist Tashi Dorji are especially examples of outstanding resourcefulness. As a duo they’ve been playing together since 2015, both coming from a punk subculture background (hardcore for Dorji, skateboarding and punk rock for Damon). That’s why it’s no wonder that loudness, a certain DIY attitude, furiousness and intensity are key elements of their music. Their previous works, Leave No Trace: Live in St. Louis and Both Will Escape, which both received 5-star-reviews on this site, are perfect examples of this. With Danish saxophonist Mette Rasmussen, the two have already expanded the duo format before and the results were an equally excellent self-titled album as well as the wonderful To the Animal Kingdom.

When Damon moved to Chicago, teaming up with local saxophone wizard Dave Rempis seemed to be a logical move, and it turned out to be the proverbial match made in heaven. On Kuzu’s debut LP, which was recorded in 2017 at Elastic Arts in Chicago, Rempis fits perfectly in Dorji’s and Damon’s vortex-like dynamic.

The music on Hiljaisuus is a game of recurring structures. Harmonic islands consisting of staccato and repetitive patterns are used as springboards and fixed points for further improvisation. “Fontanelles 1“, for example, starts with bowed cymbals and arpeggiated guitar chords before Rempis creeps into this structure with mournful lines reminding me of a wounded to death Peter Brötzmann playing John Coltrane’s “Alabama“. Dorji breaks up this structure and after seven minutes the trio reaches a first peak of intensity, with Damon playing dark, almost cymbal-free rolls. Soon Dorji and Rempis agree on one of these aforementioned repetitive unison patterns, they cling to it and open it up as soon as it seems useful. Dorji’s cold, metallic, and percussive tone is often foiled by Rempis’ and Damon’s extreme emotionality - contrast and imitation being further creative tools the trio makes use of. This way, Rempis, Dorji, and Damon invent an enormously tight pallet of sounds, energy being another compositional constituent. In “Gash“, the last of three tracks, the trio generates a constant ebb and flow, starting from coarse chopping that builds a massive, compact wave of sound creating an atmosphere that is tense to the breaking point. Finally, the piece returns to the beginning of “Fontanelle 1“, where everything started.

Hiljaisuus is the Finnish word for silence, but the music on this album is the most eloquent silence you’ve ever heard. In yesterday’s interview Tyler Damon said that Kuzu was planned as a one-off. Let’s hope that the album sells well so that there might be further tours and recordings. It’s one of my favourite albums this year and not only for fans of Last Exit and The Thing feat. Thurston Moore I’d say it’s a definite must have.

Hiljaisuus is available on vinyl and as a download. You can listen to the album and buy it here:

Beautifully accurate description of this fantastic trio's music.'Supposed to be released on CD,soon...

Martin, really great review. This album's been in constant rotation since it arrived. Definitely one of the year's best, closely contested by all the players' other albums!

Thanks Tom, wm and Lee.
@wm: Unfortunately, I guess astral spirit won't do it. Probably you have to be content with the download.

Beyond all doubt, the most enjoyable LP of this autumn... Just can't stop spinning it.

Thanks you all.
@wm: Unfortunately, I don't think astral spirits has plans for a CD release.

Oh yeahhhh!! I'm really enjoying this album along with "Brace up!" by Bill Orcutt and Chris Corsano!!


I didn't know there was a Bill Orcutt-Chris Corsano album, Thanks to Don Nadle.