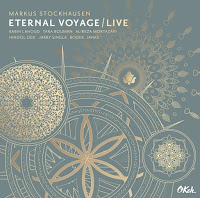 I came to this album not knowing what to expect. Given the name Markus Stockhausen (which, I admit with some embarrassment, I know only because of his earlier work with his father), I figured the recording would somehow fall under the rubric of progressive new music. Beyond that, however, I had few preconceptions. My first listen was a surprise.

As the title indicates, this is a live extension of an earlier project that released the first Eternal Voyage nearly a decade ago. The musicianship – particularly Stockhausen’s perfectly crisp flugelhorn - is impeccable. The contemporary classical elements are there, but they are interspersed among heavy threads of world music and jazz. At first listen, I had trouble listening beyond the eastern and new age fusion that initially came through quite strongly. On subsequent listens, however, I was better able to hear just how precise, warm, and moving this performance was. Personnel include Alireza Mortazavi on santur, Hindol Deb on sitar, Tara Bouman on clarinet, Rabih Lahoud on vocals, Bodek Janke on tabla and percussion, Jara Singla on keys, and, of course, Stockhausen himself.

“September Song” (not the Kurt Weill and Maxwell Anderson song) opens the album with a slow, churning swell that gives way to Stockhausen’s horn around the four-minute mark. This transforms the piece into an ethereal meditation riding atop a catchy, undulating theme. Many of the tracks - “Morning Breeze,” “Avanti,” “Alireza,” – involve similar build-ups, unison harmonics, and driving percussive rhythms that propel the pieces through a dreamlike tapestry of strings and piano augmented by fleeting clarinet and horn runs. There is rarely silence, but the dominant melodies frequently ebb into a dynamic softness that allows each instrument its own space to tenderly shine. “Undercover,” the second track, is one of the barest, most concise, and most effective pieces on the album. It consists of Bouman’s simple, utterly beautiful bass clarinet played over interlacing sitar and santur of Deb and Mortazavi.

The two most powerful tracks, however, come near the end. The aptly titled fifth track, Lösung (German for solution or resolution), begins with a pensive, almost listless dialogue between Bouman, Stockhausen, and Deb. As Sindla, Janke, and Mortazavi join, they provide the rhythm on which the dialogue transforms into a mellifluous leitmotif. Lahoud has an unmistakable presence throughout the album. Nevertheless, he shines particularly strongly on this track, especially in the stunning outburst of emotion that propels the track to its peak right before the eight-minute mark. The final piece, “Alameyn,” (presumably named after the town in northern Egypt) is equally emotive. The theme, again, is simple, but precise and billowing. Lahoud begins the track softly and mournfully. He is soon joined by a ghostly bass clarinet, sparse percussion, and tender piano. As the tabla enters, the track slowly gathers momentum as Lahoud and Stockhausen trade the spotlight, interweave, and drive the piece to a particularly impassioned climax.

In line with its title Eternal Journey, this album is a meandering and open but nevertheless coherent. Admittedly, it does not have the jaggedness I am used to. Even with all of the album’s experimentation (the album consists of primarily of improvisations on short composed themes), there are few instances of dissonance, few places wherein musicians wander too far from the trajectory. Still, with each play, I appreciate these features as feats rather than deficiencies a little more. This type of fusion does not always work. Here, however, it does. For me, it just took a couple of extra, deeper listens.