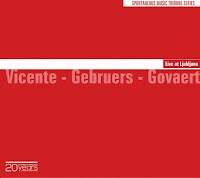 In an alternating black and red cover, the Polish label Multikulti has been presenting the "Spontaneous Music Tribune Series" for the last two years, publishing music from Portugal and Spain mainly.

On this great album, we have a trio of Portuguese trumpet-player Luís Vicente, Belgian pianist Seppe Gebruers and Dutch drummer Onno Govaert. The fully improvised performance was recorded live at the Sound Disobedience Festival in Ljubljana, Slovenia in March 2017. Vicente is well known to the readers of this blog, and we know Govaert from his participation in bands such as Cactus Truck and Spinifex, or his collaborations with Kaja Draksler. The Belgian is less known, yet Gebruers is one of the young up and coming musicians in the country, who already received several awards, including for the best debut album in 2012 from the New York City Jazz Magazine, and a musician worth following.

Vícente and Govaerts performed together in several bands, but I guess this is their first in this trio format, and it really works well. We get three pieces of 21, 7 and 11 minutes, a little less than what you might expect on a CD, but the quality is excellent. Without a real leader, the trio manages to create a wonderfully cohesive sound, very open-textured and light, with quite frequent moments when only two musicians are playing. Despite this inherent weightlessness, the interplay is intense and full of energy, sometimes contained, sometimes released, but performed with ease and with very close attention to what the others are doing. The result is fresh and sparkling, a kind of organic, natural co-creation of sound with a very pristine aesthetic.

What more do you need?