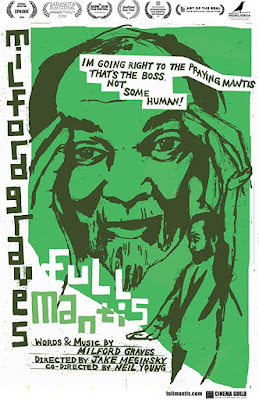 Milford Graves Full Mantis is a 2018 documentary on the legendary free jazz icon directed by Grave’s apprentice, friend, and collaborator Jake Meginsky with assistance from Neil Young (not that one). The film covers Grave’s art, work, hobbies, theories, and anecdotes in a way that is fascinating, informative, funny, and touching. Not that Meginsky needed much help making this compelling; Graves has always been a captivating and intense character but through Meginsky we get to meet the man behind the myth on a very personal level. Here we are invited into his home and given an up-close-and-personal look at one of jazz’s great musical minds. Artfully shot and edited, it serves as a meditation on Graves as a musician, teacher, scholar, and human being. Through the use of archival footage, photographs, and home movies Milford Graves Full Mantis blows the veil away from a life lived in a most sincere, passionate, and unconventional way. He discusses the enormous garden he keeps in the backyard of his home in Queens’ 40 Projects, his research on the electrical signals of the human heart, his martial art Ya’ra, his experiences with racism and inner city violence, the irrelevance of metronomes, the central role of vibrations and movement, and how music ties us to the cosmos.

As you can imagine there is a great deal of Graves’ music and percussion in the film and it provides for some great audio-visual synchronizations, especially through some of the still-photography sequences and narrative cuts. Central to the overall strategy of the documentary are the visual aspects of Graves’ home. His backyard garden is teeming with colorful vegetation that is flocked with birds and insects. The cinematography does a great job of capturing the relative immensity (remember this is in NYC) and tranquility of the space. The outside of his house is adorned with stained glass and colorful mosaic work while the interior is festooned with the unique artifacts, instruments, curios, and souvenirs of a well-read traveler. His laboratory is a spiders nest of cables and wires. LED displays flash signals and functions generated by Graves’ sensors. He discusses his background in veterinary medicine and how it led to his interest in analyzing the signals and vibrations of the human body. He then demonstrates sonifications of the heart’s electrical signals using the science and engineering suite LabView. It’s a really good example of his out-of-the-box thinking and innovative spirit.

Intimate scenes of Graves at his home are interspersed with home movies of his visits to Japan in 81’ & 88’, a concert of Graves’ quartet in Belgium in 73’ , more recent performances in 2015/16, and clips from the 1982 documentary on Graves, Doug Harris’ Speaking in Tongues . One of the most visually striking sequences shows superimposed and filtered footage of Graves in his garden. This is complemented with Graves' thoughts on learning from nature's designs. It's pretty thought provoking stuff. It's not your typical documentary in a sense of establishing a linear narrative. It's much more stylized than that. More emphasis has been placed on making it a great audio and visual experience and just allowing the audience to absorb Graves and his words and music. The opening Graves’ quote is definitely a metaphor for this movie. Don't try to analyze it, just take it in. You'll be glad you did. The movie is still screening at select venues, and future dates are listed on the Full Mantis website. The film will be released digitally by Cinema Guild in mid-December, or if you prefer it will be available for streaming on Amazon Prime in February 2019. 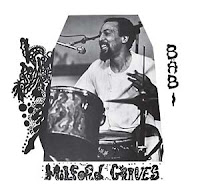 Bäbi has been in my Discogs wantlist for as long as there has been a Discogs, so my eternal thanks are to Corbett vs. Dempsey for this fantastic CD reissue of Milford Graves’ early masterpiece featuring Hugh Glover and the late Arthur Doyle on reeds and flutes. Originally issued on vinyl by Graves’ own IPS label in 1977, Bäbi has been out of print for practically its entire existence. That’s not to say its unheard music, especially in the age of file sharing & Youtube, but before now if you wanted an official piece of the cloth you had to shell out the kind of money that puts even the most fervent record collector into cold sweats. But it gets even better. The Corbett vs. Dempsey reissue includes an entire second disc containing a rehearsal tape of the same trio in 1969 from the private collection of Mr. Graves himself. And it’s not throw away material by a long shot; in fact it’s almost as good as the main attraction. This is a serious unearthing, akin to finding a hidden room in the great pyramid of free jazz. The sad passing of Doyle in 2014 gives these recordings an even more revenant-like quality, the captured vibrations of the late reedsman and flautist’s horns screaming back to us across the chasm of a half century. I had intended to review only the unreleased material and acquire a good write-up on the original Bäbi record to link to, as I figured that finding a proper review for this classic of free music by some esteemed author/artist on the Internet would be a relatively easy task. As it turns out, besides a couple of short pieces in those ubiquitous Top 10 free jazz rarities lists, there is relatively little information regarding the contents (that I have been able to find, if you find/have an interesting/unique write up on Bäbi, please link to it in the comments). Consequently, I’m afraid you’ll have to do with my interpretation/impressions for the time being.

After a short introduction by the WBAI-FM/Free Music Store’s MC, Ba explodes out of the speakers with a high intensity freak-out that’ll have squares running for the doors. This is the kind of free jazz nightmare that makes Wynton Marsalis wake up in cold sweats clutching his pillow. Graves of course is brilliant; he is the writhing nucleus of spiky energy around which the horn squall revolves. Doyle is heard here at the height of his capabilities, shrieking his wraith-speak in stabbing phrases while Glover displays a slightly broader but no less fiery palette. The trio stops on a dime around the 4 minute mark where Graves’ goes a Capella with his rousing vocalizations. The remainder of the song builds off of this recipe, scattering flourishes of flute and vocals before Graves brings it all to a stop with an ecstatic howl. Bi is a shorter affair; both Doyle and Glover (left and right channels, respectively) shred their reeds to splinters over Graves’ tight mile-a-minute percussion. His drumming has a fullness about it that lacks in a lot of free jazz from this period. He sounds like a one man drum circle for much of the record. Mixing in non-traditional skins and traps he presents a kaleidoscope of rhythmic color as the framework of these improvisations. This in turn allows the reedists to play completely untethered from the form, confident that Graves will fill any gap with his roiling systematic animation. The final song from the original album, the title track Bäbi, begins with a quintessential free-vocals/percussion intro by Graves. Throughout the album he electrifies with his variety and creativity. At almost 3 minutes in Doyle and Glover come searing back into focus. Glover honks wildly, building into a fury of staccato screams. True to form Doyle stays firmly within the red while soloing, his ecstatic howls and otherworldly altissimo xenoglossia keep the intensity burning like live coals. There is a brief repose in the rapturous action during which Graves again comes to the fore with more terrific theatrics before the trio engages again and completely incinerates the proceedings.

The first track on the unreleased 1969 rehearsal tapes serves up almost a half hour of continuous high energy free jazz. All three musicians sound fantastic here, for reference this is around the time Graves played on Sonny Sharrock’s Black Woman and Doyle joined Noah Howard aboard his Black Ark. Glover’s history is a bit murky before and after his work with Graves. He’s only credited with two releases on Discogs, Bäbi and the Folkway LP New American Music Vol. 1 (where he plays a duo with Graves called Transmutations). He, like Joe Rigby and Arthur Doyle were Graves’ go-to reedsmen in the early-to-mid 70’s and he sounds just as fiery here as he does on Bäbi. The next track finds Graves providing a wild free-vocals/drums intro similar to Bi on Bäbi, but much less controlled and freer. I can’t be positive, but it sounds like Doyle is playing bass clarinet here. His cadence is unmistakable and although he plays mainly in the altissimo register, my ears detect a few low honks hidden in the din. In some sections it’s hard to tell if what you’re hearing is Graves’ vocalizations or Doyle & Glover’s horns, an interesting effect the murky recording quality provides. The songs get progressively shorter as we go along, the third track presenting Doyle singing into his horn over split tones, a technique he would refine for the rest of his life. Graves & Glover join in sharply and the energy is again ratcheted into stratospheric regions. The final track finds Graves working his gongs while Doyle and Glover weave dissonance into and through the rumbling percussion.

This is absolutely essential material and now that the price is right, there shouldn’t be anything stopping you from getting your hands on a copy if you so desire. This in addition to CvsD’s reissue ofGroupcomposing will keep you warm all winter long. In his book Vinyl Freak: Love Letters to a Dying Medium, John Corbett mentions that he’s also been working on a deluxe box reissue of Graves’ Nommo, which if/when realized would remove another long standing item from my want list. So until then, enjoy this classic chapter in the ever-continuing story of free music.
Paul on Saturday, November 24, 2018
Share

If you like obscure horror movies Milford Graves acctually did the music for the 1975 film LORD SHANGO. It´s mainly voodoo-style drumming, quite heavy and massive, and the film is not all that great but not terrible either.

Thanks Gents, I had actually heard of Lord Shango but didn't realize it was Graves that provided the music, thank you very much for the tip Magnus!

I saw this a couple of months ago in London. Terrific film about a seemingly lovely human being. Definitely second the don't analyse just let it flow over you advice