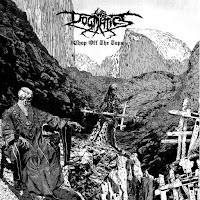 The Dogmatics is the secretive duo of Australian, Sydney-based pianist Chris Abrahams, a founding member of the legendary trio The Necks, and German, Berlin-based clarinet player Kai Fagaschinski, known from the clarinet duo The International Nothing and the group The Magic I.D. The two met when Abrahams stayed in Berlin in and between tours, where he and Fagaschinski began playing together at a friend's piano-armed kitchen back in 2007. This collaboration was a rather private affair for some years until the release of their debut album The Sacrifice For The Music Became Our Lifestyle (Monotype, 2012), followed by a European tour.

Chop Off The Tops was “hammered and blown” by The Dogmatics already on June 2013, mixed by the duo, and mastered by Werner Dafeldecker the year after, before the duo opted for an off-road hibernation. The cover artwork, with the death-metal lettering and gory, religious image, was done by Zev Langer, the guitarist-vocalist of the Australian death-metal group Conatanimated. The titles of the album and the four pieces reflect the sarcastic-cerebral approach of The International Nothing.

Chop Off The Tops, unlike the absurdist, short stories of The Sacrifice For The Music Became Our Lifestyle, suggests a deep dive into abstract and lyrical textures that bridge the distinct, repetitive piano clusters of Abrahams and the ethereal statis that Fagaschinski creates with his clarinet. The minimalist and delicate pieces of side A - “It Never Yielded Results Which They Had Failed to Discover by Other Means” and “I Am Now Wearing Surgical Gloves” - can be experienced as The Dogmatics’ highly disciplined exploration mission into the molecules of sound. Both Dogmatics are fascinated by the otherworldly, fluid sonic substances and the subtle, alchemist process of shaping and shifting these transparent, crystalline sounds, where the sense time also becomes a kind of liquid entity that loses its linear characteristics.

Side B offers a different side of The Dogmatics. It begins with “Nobody Knew Their Reasons”, a short and playful peace, in the most absurdist and sinister manner, where Abrahams employs the wooden body of piano as a resonance box and Fagaschinski offers white noises with his extended breathing techniques. The Dogmatics resume their former minimalist-abstract mode on the last, extended “Death Is Now Your Friend”, but in a more open and tense manner. This time both do not just mirror each other sonic explorations but teasing and somehow “chop off” the other’s sounds.

The Dogmatics advise to “proceed with caution” to their sonic excavations, as “suspicions have arisen as to the objectivity of their findings”. I would like to know more about their too long, off-road expedition.

I'd buy anything Abrahams is involved in. He's a unique and special talent for sure.