Here we have two duo albums on double bassist Barry Guy’s Maya label. The other guys are familiar, having performed and recorded with him previously: trumpeter Peter Evans with the Guy, Evan Parker, Paul Lytton trio, with Guy and pianist Agustí Fernández, and as part of Parker’s Electro-Acoustic Ensemble; and percussionist Ramón López as a member of the Aurora Trio with Guy and Fernández. They’ve both also featured in his Blue Shroud Band. With that kind of form expectations are raised and met in recordings occupying very different dimensions. 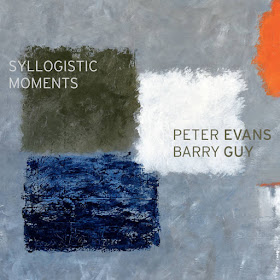 This is a performance by Guy and Evans from Uster, Switzerland at the PAM-Festival in November 2016. As to the title, the notes provide the following definition of a syllogism – “a form of reasoning in which a conclusion is drawn from two given or assumed propositions.”, for example: all men are mortal, Socrates is a man, therefore Socrates is mortal. The analogy is that the various moments which make up each piece are entailed by the dispositions of the two players at that stage of the performance. Aristotelian logic is abandoned beyond the album title however, and each track is named after a colour pairing, according to Guy, neutral in not evoking metaphor or imagery beyond the listener’s own imagination. (I think he missed a trick here and should really have named each of the pieces using the mnemonic terms given to the different forms of syllogism by medieval logicians: “Barbara”, “Cesare”, etc.)

More tellingly, Guy mentions the athletic nature of the improvisations, the musicians delving into minutiae with intense listening and decoding of intentions, keeping their minds and bodies in high alert. Certainly, anyone who’s seen Guy play will appreciate the visceral engagement with his instrument, generating fizzing textures and dizzying shifts like a tornado animating and absorbing all around it. His playing is so heavily loaded with tangled complexity that you can feel the sheer thrill of extremity, a near physiological affect. Yet behind this lies an acute intelligence – studied but spontaneous, rarefied but grounded in the materiality of instrumental texture – a musician deeply versed in a wide repertoire with a firm understanding of the nuances of string sonority and how to thoroughly integrate the diverse idioms which attract him. Likewise, with Evans who’s an equally commanding presence employing a virtuosic range of trumpet techniques that have an immediate, sensual impact.

The result is a muscular, highly volatile duo which is almost permanently unstable, operating not so much in dialogue as through an extended series of galvanic reactions and endlessly changeable configurations. The exploratory aims of such music-making inevitably challenge our notions of congruence, the way things fit together, like examining the mechanism of a watch for anyone other than a watchmaker. Interest is maintained and rewarded not just through recognisable locutions and areas of affinity – bright-toned fanfares, resonant bowed double stops, microtonal glazes – but because there are hyper-speed exchanges and compressed layers impossible to parse or pin-down. During ‘Green White’ the instruments sneak and dance about each other, jerky and graceful like a pair of wobbly tightrope walkers. Equilibrium is eventually reached in Evans’ subdued trumpet coda, one of several quiescent passages amid the crackling currents. ‘Red Green’ switches between recurring spurts of energy and static tension, and ‘Red Grey’ concludes with waves of saturated trumpet and meaty, arco chords.

One of the advantages of musical mazes, with no obvious entrance or exit points, is that many paths are available. ‘White Red’ flows with highs and lows, divergences and little surprises, and in the final piece, ‘Grey Blue’, the pair scuttle in criss-crossing trajectories, wayward yet directed according to some inner logic. 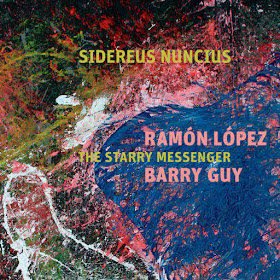 Recorded at López’ suggestion during the downtime of a studio session in Paris in November 2017, the album is named after Galileo Galilei’s astronomical treatise (1610). According to Guy, Lopez’ drums and cymbals prompted thoughts of a metaphorical planetary system, with the studio microphones acting like a telescope, “bringing details of our own musical cosmos into sharp definition, illuminating the sometimes craggy terrain of our deliberations, but also observing the more spacious musical topography”. The reference to scale is significant; what counts as large or small, surface or detail being largely dependent on perspective and context. These thirteen relatively brief episodes reveal a musical universe contracting in size and expanding in particularity: studies in microscopic activity rendered macroscopic where any element, however small, can become central.

The duo charts this space in a variety of forms. López’ percussion consists primarily of cymbal washes, deep pulses, snare rolls and a ticking hi-hat, a measured backdrop as Guy picks and saws his way into Lilliputian sound worlds, full of refined textures and subtle gradations. In ‘Gravitation’ his bass focuses on tiny scrapes, bounces and shivers, rising above throbbing drums then dragged down again. ‘Particle Waves’ opens out a knotty, modulated landscape whereas ‘Time Loop’ consists of minuscule movements, barely articulated twinges, thrums and taps. ‘Sigma Orionis’ moves from frosty bowed harmonics to increasingly elaborate pizzicato arabesques and ‘Sundrum’ is a succession of slow-motion shockwaves initiated by López’ percussive shudders, as if offering an exploded view, paused and rotated as a three-dimensional structure. By way of contrast, in the following ‘Expansion’ Guy skims and flickers creating a stream of diaphanous vapour. ‘Occam’s Razor’ – the medieval philosopher’s famous maxim of ontological parsimony, that entities should not be multiplied without necessity – is suitably pared-down to essentials, with plucked arpeggiated chords spread across different registers, accompanied by simple brushes. ‘Extraterrestrial’ stands out as a meditative interlude, its drifting Baroque harmonies referencing another of Guy’s musical passions.

Both albums can be previewed and downloaded from Maya Recordings’ Bandcamp site, including hi-res files (96/24 and 88.2/24, respectively) which vividly capture the timbral richness and dynamic weight of the two duos. Well worth exploring.
Paul on Wednesday, November 28, 2018
Share

In addition to being in the Blue Shroud Band, both Evans and Lopez are featured on the Not Two release "Tensegrity" of small formations, similar in conception to "Mad Dogs" and "Mad Dogs on the Loose".

“Tensecrity” is an album by the Blue Shroud Band (Small Formations):