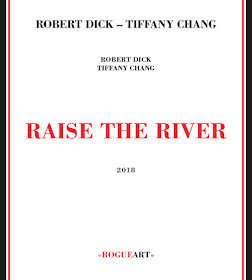 I more or less operate under the belief that whatever Ned Rothenberg touches is gold, so my first encounters with Robert Dick were through his work with New Winds, with Rothenberg and J.D. Parran, and his debut, the solo Whispers and Landings on Rothenberg’s low quantity-high quality Lumina label. I’ve intended to explore more of Dick’s discography for some time (especially his well-received ‘90s recordings), so I jumped on Raise The River when I saw he had some work from this year. I was also intrigued by the flutes and percussion duo, which I don’t frequently hear in free music and I imagine as a kind of ancient music, and that the percussionist, Tiffany Chang, is (as far as I can tell) a new voice releasing her first recording.

Raise The River was recorded in studio in 2015 and is 56 minutes across 9 tracks. What characterizes the album, for me, is the sheer variety displayed for a duo, which makes an hour of listening fly by like half that. Within each track, musical time and space ebbs and flows with Dick’s flute, which exhibits drawn-out drones, nimble tonal flights, and everything in between; Chang is quick to match the mood often set by Dick, though perhaps it’s Chang that provides a more stable sonic canvas upon which Dick can paint his more abstract accents. Both players are comfortable going silent to allow the other to determine the next path taken, and the music is never non-dynamic. Chang’s colorful, pointillistic playing is constrained to traditional use of the drum kit except for an mbira on “This Once” and some chains on “Recovered Memory;” Dick’s playing conflicts with and compliments this as he freely incorporates multiphonics, whisper tones, tongue stops, key slaps, singing while playing, glissando, and other extended techniques for the flute throughout the tracks. Perhaps the greatest source of variety comes from Dick using flutes of different register, tuning, or tailoring for every track except “Bricolage” and “Recovered Memory,” which both use a contrabass flute. I’ve been enjoying the album like a single set or statement, but perhaps a standout moment (and one that again exhibits this variety) is the one-two punch of the title track and “This Once;” the longest track with a bass flute and traditional drumming followed by the shortest track with a little flute and mbira.

The palette of this work only increases with the contrasts between the voice of an established master and a talented new voice. Those voices displayed here encourage me to continue digging into Dick’s work and to look out for new work from Chang. Recommended for fans of Dick, the flute (though the two seem synonymous), or just as a very strong album for the year.

Raise The River is a CD-only release.