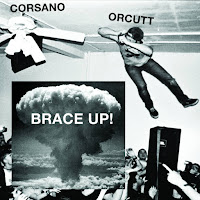 I generally buy anything Bill Orcutt releases for better or worse, and I’ve been both genuinely throttled and slightly disappointed by his steady stream of releases. Some of his work plays like an exorcism, some of it feels inane (perhaps the result of being so prolific), but it’s always full of activity and the passion can’t be denied. His unique guitar playing style has become his own distinct language that he’s used to reconstruct punk, folk, and the blues into something else, is own exclusive ‘other’. No one sounds like Bill Orcutt sounds and that’s why I buy them all. His collaborations with Chris Corsano are some of my favorites, as Corsano has a way of ushering out the best in his cohorts (see any of his mind-blowing work with Paul Flaherty for testament) and is one of the best free improvising drummers active (I’d put him in the top 5 without batting an eyelash). This is their fourth release as a duo if I’m counting correctly, and it’s their first studio album, which removes some of the grit of their live recordings and gives a nice hi-fidelity look into their dynamics.

The record kicks right into high gear on the title track driven by Orcutt’s plunky cluster bombs and Corsano’s everything-and-the-kitchen-sink rhythms. It’s over before you can even process it. Similarly, Amp vs Drum has the underpinnings of a sonic water-balloon fight; it’s a brief but fantastic display of ecstatic give and take from the duo. On Double Bind the pair allows themselves to spread it out a bit more. Orcutt’s guttural vocalizing shows out a bit here, although it’s not nearly as audible as on his acoustic material. The song takes the form of an abstracted free punk/blues blowout that is pummeled into the red by Corsano, who sounds as good here as he’s ever sounded anywhere. She Punched a Hole in the Moon for Me is next, and takes a more probing stance from the outset and builds slowly in intensity. Orcutt’s free vocals are used to good effect here to ratchet up the tension as is his guitar playing, which goes from bluesy and sparse to full-on shred. Corsano follows his lead, providing peaks and valleys of roiling percussion for the guitarist to improvise over.

Poundland Frenzy , Clapton’s Complaint, Bargain Sounds, and Paranoid Time are all brief-but-furious bursts of energy, each lasting well under a minute. They are bite-sized morsels of twangy rhythmic goodness that burn a white hot path to The Secret Engine of History, where the duo again takes on a wonderfully varied and extended improvisation. Love and Open Windows is another longer piece and perhaps the most introspective number on the record. Orcutt’s spacious guitar playing takes on an undeniably Americana-esque inflection, reprocessed via his intrinsic jumble and worry, while Corsano takes on the similarly reflective tenor, offering up more open spaces between his rolls and clusters. The bedlam resumes on the wonderfully titled He Do the Police in Different Voices. The incendiary guitar takes to the fore and drives wild riffs and runs atop Orcutt’s spittle-pocked yelps and gut-hollers. The record ends with Paris Spleen, a choppy avant-blues that becomes more and more prickly, culminating in a percussive explosion of worming, wiry guitar and churning drums.

This is by far the most cohesive sounding album from the duo yet. I’m not sure if it’s the studio environment and good mics or whether after all these years of playing together they’ve just gelled on a whole other level (maybe a little bit of both), but it sounds fantastic. Orcutt has exhibited a refinement in his playing on his last two albums (both studio affairs) that has brought a clarity missing from his other electric material. Yes the music is still frenetic and noisy, but it’s much easier now to see where he’s going and the impossible heights he’s reaching for. And here he has Corsano to give him a boost.

Great review of an excellent album.

Thanks for the kind words.

It's worth noting, and I don't in the review, that a lot of Orcutt's electronic work is available on the Fake Estates Bandcamp page (for those so inclined):