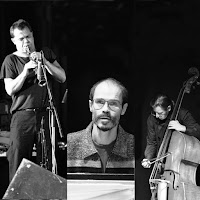 Although Wolfgang Fuchs might not be the first name that comes to your mind when you think of FMP, the saxophonist and clarinetist was a typical artist of the famous Berlin free jazz label. He developed a very distinctive sound (Stefan Keune was obviously influenced by it, e.g.) and he was an excellent team player in both large and small ensembles. After he had moved to Berlin in 1974 he played with a large number and variety of FMP musicians including Fred van Hove, Sven-Åke Johansson, Hans Koch, Philipp Wachsmann, Georg Katzer, Evan Parker, Peter Van Bergen and Paul Lytton. He was also a member of Butch Morris' Berlin Skyscrapers project and he participated in various Cecil Taylor bands including the 1986 European American Group, a 1991 Scandinavian tour band featuring Taylor with Tony Oxley, Barry Guy and Harri Sjöström, and the 1999 Workshop Ensemble. The most well-known and outstanding group with which Fuchs has been associated is King Übü Örchestrü, a tentet he founded in 1983 and of which he was the leader with all the changes in personnel and size. Especially Binaurality (FMP, 1992) and Trigger Zone (FMP, 1998) are marvellous, highly recommended albums. Duets, dithyrambisch, his recording with Hans Koch, Louis Sclavis and Evan Parker, is one of my all-time-favourite freely improvised albums. Last but not least, Fuchs was also a prolific organiser, for example as the artistic director of the Total Music Meeting 2001 in Berlin.

On this recording, a concert at the FMP studio in West-Berlin from 1984, you hear Fuchs on sopranino saxophone, clarinet and bass clarinet in a trio with Bernhard Arndt on piano and Hans Schneider on double bass and bass guitar. Fuchs - Arndt - Schneider shows Fuchs at his best, his squawking, squeezed tone collides with Schneider’s harsh, often bowed lines and Arndt’s extended piano technique. The band is more interested in creating a new pointillistic soundscape from a European new music perspective than updating the American free jazz continuum. If you listen to “First Set 8“ to “Second Set 2“ in a row, the whole palette of their tonal cosmos is deployed. Fuchs’ staccato-like bird calls are answered by Schneider’s bass, which sounds as if a lumberjack was at work. Arndt’s piano sways between two-finger simplicity and textures created in the interior of his instrument. However, he can also hurl out fragmented Schlippenbach-like clusters and gloomy runs with his left hand while Fuchs answers with breathless anacolutha on bass clarinet. Drama, brutality, lyricism, intensity, masterful musicianship - the band’s musical spectrum provides a rare aural pleasure even 34 years after the recording was made. One of the re-issues of the year.
Wolfgang Fuchs died much too early of a heart attack in February 2016.

Fuchs - Arndt - Schneider is available as a digital download only.

You can listen to four pieces and buy it here: 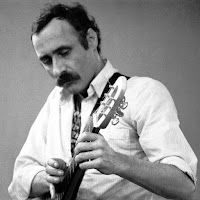 The FMP label has released many free jazz superstars, but guitarist Achim Knispel has remained rather unknown. Knispel, who was also a visual artist, was self-taught and established a unique sound that was rather rock-orientated compared to other FMP artists. He used to turn his amplifier fully on in order to generate noise by the slightest touch of the strings. Characteristic of his style is his hammer-on and pull-off technique, which he sometimes put to the extreme. Imagine a crazy bastard child of AC/DC’s beginning of “Thunderstruck“, King Crimson’s Robert Fripp, and Derek Bailey. So far, his small work has consisted of his solo album “Strapse“ (FMP, 1979), “Erdmännchen“ (FMP, 1977), a duo with Hans Reichel, and “Eickendorffballade“ (FMP, 1981), a duo with drummer Willi Kellers. With the latter he worked during the 1980s, their duo was sometimes extended to a trio by either Trevor Watts or Lol Coxhill.

Now Destination:Out has released Total Music Meeting 1994, a recording of his solo performance from the festival of the same name, which sums up everything which makes Knispel’s music so wonderful. Especially “Untitled 2“ hides exquisite little hook lines beneath a drizzle of notes, Phrygian chords, arpeggios and blues rock riffs. The lyrical and narrative quality of these pieces is reminiscent of Bill Frisell, although Knispel’s sound is less warm and therefore a bit crispier and dust-dry - like a sparkler that burns at both ends.

Total Music Meeting 1994 is available as a download here: 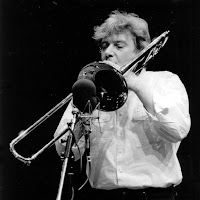 As opposed to Knispel, Hannes Bauer is quite well known, especially in Germany where the trombonist was very active up until his passing in 2016. He has a long legacy - first recording with FMP on the Snapshot Jazz Aus Der DDR with the Ulrich Gumpert Workshop Band, then with the Manfred Schulze Bläser Quintett, the Conny Bauer Quartet, the Heinz Becker Group, and the  exceptional Doppelmoppel (also with older brother Conny on trombone and Joe Sachse and Uwe Kropinski on guitars). Bauer was also a part of the Globe Unity Orchestra, as well as a member of Peter Brotzmann Tentet, so he really had a deep connection with the label. It's only fitting that one of the latest of the 'new' releases from FMP (digital only) is a solo concert from Bauer. Recorded July 1, 1995 at Haus am Waldsee/Berlin, the tape of the concert was cleaned up and re-constituted by guitarist and audio-engineer Olaf Rupp and it sounds wonderful. The rich tones of Bauer's horn are entirely present and alive on the recording and the audience's appreciation between tracks is the only indication that this was a live recording. Other than that, it's just Bauer strong tones and vivid imagination, swooping between highs and lows, syncopated and joyful. It's a real pleasure to listen to various sounds and ideas - from the whimsical to the textural to the guttural - that Bauer presented. The recording whips by in its 35 minutes, leaving you hoping that there is still more to come from the FMP vaults.