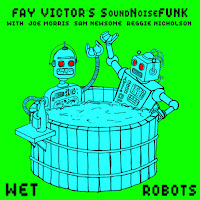 Fay Victor is one of the most thoughtful, deep, and groundbreaking vocalists. With her new group, the absolutely wild quartet SoundNoiseFUNK, Victor explores much of the simmering pain, confusion, and fear of living in 2018, while retaining a sense of hope and humor. SoundNoiseFUNK is a spry and fierce super-group, featuring Sam Newsome on sax, Joe Morris on guitar, and Reggie Nicholson on drums.

Impressively—for who among us has not railed against the internet around the dining table—Victor’s “Information Superhighway” brings a genuinely fresh perspective on the turbo-speed disconnection of modern electronic communication (hello, blog readers!). She also delivers the blisteringly wry line that gives the album it’s title, predicting we’ll charge forward “until we short-circuit like wet robots.” The delivery undercuts the lightness of the cover art, with its two bro-like robots chilling and high-fiving in a homemade jacuzzi. “Police Lights and Sirens” features Victor and Newsome in a stunning duet, over a looping blues-funk groove. The unsaid pain hardly goes understated, however, with Newsome in particular sounding out a series of popping notes sounding more like quiet sobs than gunshots, reflecting on the extended aftermath of living in constant fear. Later, on “The Blues Are Always Free,” Newsome blows a gorgeous lyrical solo that lifts the whole track. He’s in really excellent form here, having spent the better part of the 2000s honing his soprano playing to a fine point.

“Creative Folks!” is both an ode and a command to creative artists, as Victor repeats, “We need each other,” and Nicholson plays a brisk funk rhythm recalling his work with Henry Threadgill. “Keep creating, the creating is connection, the contact feels like love,” sings Victor, and the group embraces her pleas fully on the following track, “Textured Pines,” the lengthiest piece on the album, stretching out in a patient, inviting improvisation, with Morris bouncing off Newsome, as Victor intwines her vocalizations through their duet. Later, on “I Sing,” Victor lays bare her raison d’être, supported by the trio of instrumentalists. It’s a lovely ode to artistry, and the group ably amplifies the creative spirit.