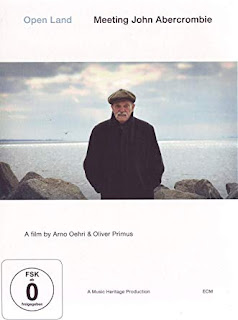 I was between concerts at the Kongsberg Jazz Festival this past summer when I wandered into the cinema where Open Land was playing. From the opening moments, I was transfixed from the opening shots of the New York skyline across the Hudson River as the blue winter-light of the brittle upstate winter and the dark reds and browns of the city streetscapes reflected the warm/cool contrasts of guitarist John Abercrombie' lyrical music.

As the documentary gets going we're traveling with Abercrombie from his home north of the city down to a gig by train. Set against the rich tone of Mark Feldman's violin in Abercrombie's "Sad Song", the city comes into focus as the song's timeless melody unfolds. Familiar landmarks pass by and the stillness and insular quiet that one can find, something that seems impossible amid the agitation of the city, sets a tone. We then arrive at the jazz club Birdland, in the middle of Manhattan's busy theater district. Then, the cars, trucks, and traffic cones disappear and we find ourselves alone with the guitarist in his house, a Guild hollow body in the background, talking about what made him want to become a guitarist, specifically electric guitarist (the answer, simply, 1950's Rock and Roll).

Abercrombie is at ease, he's reflective, and there is a hint of mischief in his eyes. As the film continues we see him talking with a luthier about a sweet looking green semi-hollow. He jokes about having 10 - 15 guitars in a room, he says "it's easier than collecting pianos." He is plain spoken, with self-effacing humor and a bit of reservation, in fact, you can almost hear in the music how he interacts with the world around him.

During the early parts of the film, we get to walk with Abercrombie as he talks about his life, his memories of childhood (like the mean neighbor who wouldn't give the baseball back if it went into his yard), and the places he lived, set to a soundtrack of his own music. Organically, stories of his life unfold, as the camera again follows the train line (on the train) down the Hudson Valley to Grand Central Station. The bleak white snow covered landscape lends a certain aesthetic to the whole film and his memories of being exposed to jazz and how his interest grew is connected to the train ... he relays a story about how, as a teenager, he would take the train to city and go to clubs to see John Coltrane ("Hearing that live ... I had no idea how to relate to it") and Bill Evans ("I thought he should be playing a little cocktail lounge ... years later he became one of my favorite musicians of all time").

Next set to the urgent tones of his song "Banshee", we fly with Abercrombie to Europe. The visuals are stark, ECM-like in their striking, but non-specific details. Long time associates begin showing up and talking about playing and working with Abercrombie. Drummer Adam Nussbaum talks about the effort they make to play and how open and trusting nature of the guitarist.  Organist John Versace talks about how he met Abercrombie, essentially stepping in to replace Dan Wall who had decided to move back to the Mid-West.  Their stories lend support to the general impression of the soft spoken guitarist.

The concert footage from a show in Lichtenstein is sublime, from the stage banter to the delicate rendition of "Another Ralph's".  We also see Abercrombie teaching a students at SUNY Purchase, interacting lovingly with his wife Lisa, and jamming with friends. We hear him tell stories of how he shared a moment getting stoned with Thelonious Monk, about the gear and guitar through the years, and the music he has made. The film really connects the man and the music: the sensitivity of the music, the generous humor of the person, and the people with whom he chose to surround himself and play with.

Abercrombie had long been a favorite musician of mine, I tried to see hear him play whenever I could, and was saddened when he passed away last year. The tribute concert last year at Roulette in Brooklyn was nice, and it was great to hear and see so many people who felt similarly, so this documentary really hits the right notes. We are lucky that Arno Oehri and Oliver Primus decided to make this film, when they did, capturing the moments that they could.