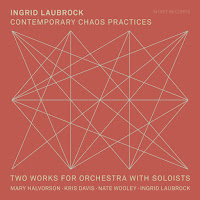 With Contemporary Chaos Practices the celebrated saxophonist Ingrid Laubrock has provided a conclusive highpoint of creative music in 2018. The album combines Laubrock’s excellent orchestral scores with improvisations from soloists Mary Halvorson, Kris Davis, Nate Wooley, as well as from the composer herself. I didn’t have the chance to listen to this album properly before I submitted my year end list, as it should certainly have been included (it would have been an impossible task though, to choose one to drop, what a year!). According to Steve Smith’s excellent liner notes Vogelfrei was written for the 2014 second Jazz Composers Orchestra Institute Reading, while Contemporary Chaos Practices was written for the 2017 Moers Festival, making both of recent vintage. Smith writes that Laubrock’s initial inspiration for writing orchestral scores came from seeing Anthony Braxton and Walter Thompson at The Irondale center in Brooklyn. The trifecta of composition, improvisation, and conducting was a natural progression for Laubrock, who was already mixing composition and improvisation in her smaller ensembles and had been exposed to the creative functions of conducting via the London Improvisers Orchestra. On Contemporary Chaos Practices her combination of inspirations is seamless, drawing from classical, jazz, and experimental streams of expression and weaving them into a wonderfully strange and multifaceted whole.

'Contemporary Chaos Practices (Part 1 and Part 2)' begins with Halvorson’s hiccupping, pitch shifted, guitar psychedelics bookended by powerful orchestral forays and resonant brass figures. Hovering over this are flute and woodwinds that flutter in quickening runs like dragonflies over the surface of a pond. The strings become more assertive, pushed along by the brass and the liquid guitar playing, culminating in the rapid arco of the contrabass, slowly dimming and taking on gravity as it goes silent. Laubrock takes skirting runs at the edges of the icy string playing, stirring up drama on soprano saxophone. At around nine minutes there begins a wonderful passage of orchestral dialogue that is quite cinematic in spirit, that slowly dissolves into almost pure texture over the second half, utilizing a broad palate of sounds to spectacular effect. 'Contemporary Chaos Practices (Part 3)' begins as the previous track finished, with high pitched textures from the instrumentalists that simultaneously suggest wind chimes, distant playground swings, and insect calls. Around the midpoint, the jaunty contrabass clarinet and trombone precede the return of the orchestra, which delivers powerful galloping passages interspersed with short colorful responses of strings. The shortest piece, 'Contemporary Chaos Practices (Part 4)', begins with a somber introduction from the brass and woodwinds, which carefully builds and grows into something large, dark, and slightly menacing before fading back into the silence. Vogelfrei begins probingly over bowed string harmonics, combining gorgeous orchestral swells with more pointillist playing from the soloists. A little after 7 minutes the orchestra is augmented with vocalists, who provide choral underpinnings for the piece. Kris Davis comes to the fore, dueling with the strings as Josh Sinton makes use of amplified contrabass clarinet to provide a dissonant and subtle counterpoint. The finale utilizes driven percussive statements with chorale accents to establish a churning undercurrent over which the brass and woodwinds combine in a discordant commotion that peels away and leaves a lone scratching fiddle bow.

What I enjoy the most about this album is its ability to surprise, as none of these songs evolved in a manner that was obvious to me. The soloists are also incorporated in a unique way as well. Rather than being provided a break to solo over, they’re generally left to their own devices over specific portions of the arrangement, making them feel less like solos and more like organic outgrowths of the whole. This is a brilliant record in both concept and execution, and the recording quality is vivid, catching all of the subtleties furnished by the musicians across a large dynamic range. Perhaps the most exciting revelation of all is that Laubrock is just getting started with orchestral compositions, leaving a wake of excitement for what’s to come.

Agreed, Nick. Consistently inventive and full of colour, Laubrock manages to weave composition and improvisation together in a seamless fashion. It’s in my top 10.

I was glad to see that you and some of our other colleagues had it in your lists. It definitely belongs in the New Ears poll.