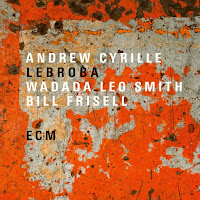 Andrew Cyrille made his name in the free jazz world as the drummer in Cecil Taylor’s outfits, including featuring on the seminal albums Unit Structures and Conquistador!. Previous to joining Taylor, Cyrille had also played with other established artists such as Walt Dickerson and Coleman Hawkins, and later went onto to record with Oliver Lake, recording just as many albums with him as he had with Taylor, notwithstanding the recordings he made with David Murray, Marilyn Crispell, and Carla Bley to name a few. As well as providing services for many other artists over the years Cyrille has produced a fine and diverse body of work himself, his first album What About? being a solo drum/percussion affair and something he developed further with the duo recordings he made with fellow jazz drummer Milford Graves. Not only is Cyrille a fine free jazz drummer, having developed his style and technique during a time when the more forward looking artists were looking for more than just a time-keeper, and the likes of Cyrille were wanting to explore the possibilities and redefine the notion of the drummer, but he is also a fine composer as well. Lebroba is his second album for ECM, following up on 2016’s The Declaration of Musical Independence, which also features Bill Frisell. Whereas that was a quartet date, Lebroba is a trio featuring Wadada Leo Smith as well as Frisell and himself.

Lebroba is rich in its musicality, and the strength of the three musicians individually is key to this date, with all of them on fine form. The title being an amalgamation of the first few letters of each musicians’ respective birthplace. Personally, I was very interested to hear this album, as I have enjoyed each musicians’ playing recently in other projects, including Cyrille’s contributions to Ben Monder’s Amorphae, Leo Smith’s Najwa, and Frisell’s duo with Thomas Morgan - Small Town. Having pulled this trio together the end result doesn’t disappoint, it is also the first time Frisell and Smith have recorded together.

There are five pieces on the album, two are Cyrille’s, one each from Frisell and Smith, and a collaborative improvisation. The opener is ‘Worried Woman’, originally from Frisell’s Beautiful Dreamers album, with Frisell’s guitar echoing Smith’s phrases at the beginning within a free pulse that skitters along towards the end with the help of Cyrille’s cymbal work, whilst being careful not to imply any particular metric unit. Smith’s ‘Turiya: Alice Coltrane Meditations and Dreams: Love’, not only has the longest title but is also the most expansive piece on the album coming in at seventeen and a half minutes. The traditional roles of soloist, accompanist, and time-keeper are not entirely dispensed with here but are used in a looser way, allowing the different musicians to interact more directly with each other whilst nodding to the past. There is much space in the music throughout this piece and the sounds are framed by their respective silences quite purposefully, with each of the musicians coming together in different combinations to form varied musical textures. ‘Lebroba’ is a husky bluesy piece, made even more so by Smith’s sexy Harmon mute drenched phrases and Frisell’s accompaniment, which flirts around with the blues inspired theme. ‘TGD’ is the collaborative improvisation, finding Frisell sporting a slightly more abrasive sound that goes head to head with Smith’s trumpet, the two lines weaving into each other at certain points. The closer is the most straightforward piece, Cyrille’s ballad ‘Pretty Beauty’.

Throughout the album, Cyrille’s fine and intricate percussive playing can be found, adding textural flourishes, dynamic swells, carefully placed punctuations, and skilfully placed timbral additions to the others contributions and the music as a whole. What he started over fifty years ago, the master drummer continues on Lebroba with two other masters of their art.
Paul on Monday, January 28, 2019
Share