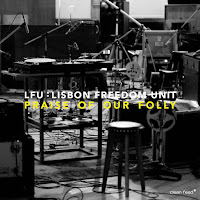 The Lisbon Freedom Unit is a nonet comprising Luís Lopes (guitar), Rodrigo Amado and Pedro Sousa (tenor saxophones, left and right), José Bruno Parrinha (soprano saxophone & clarinet), Rodrigo Pinheiro (piano & rhodes), Ricardo Jacinto (cello), Hernâni Faustino (double bass), Pedro Lopes (turntables & electronics), and Gabriel Ferrandini (drums & percussion). As implied by the Unit’s name, this is a collaborative exercise where there is no leader but a subsumption to group sound and development, an approach to free improvisation probed in the early days of Brit Improv by AMM, the Spontaneous Music Ensemble and the Music Improvisation Company. As Evan Parker has observed, in the most general terms this involved finding ways of melding into the ensemble, most typically by either dissolving instrumental character with an emphasis on layered, commingled textures, or fragmenting individual voices, listening and interrupting using overlapping invitations and responses. Nowadays, and as heard on this album, what might be thought of as the gestalt versus multiple discourse strategies for collective improvisation are regarded as merely different points on a line, options amongst many for exploring group dynamics.

For good reason, this kind of improvisation lacks direction as that usually requires a director or an agreed route, means of organisation which are antithetical to extemporary investigation, though in other contexts they have their place. This doesn’t mean however, that it has no purpose or is devoid of narrative logic. Instead, there’s a procedure best summarised by Winnie the Pooh, “I always get to where I’m going by walking away from where I’ve been”, a non-teleological process of discovering fresh ground, or old ground in new ways, incrementally and from various angles, working with the unpredictable yet avoiding a mere succession of disconnected sounds. In short, creating by unexpected connections rather than making according to a preconceived idea. It’s in the space between the calculated and the chaotic that meaningful activity forms, and different ways of using informed intuition to find and plot that territory are what these four improvisations are about. The musicians are no strangers to such matters. Within the ensemble we find the RED Trio, an exemplar of band integration, the Garden trio, the duo Eitr, two-thirds of Rodrigo Amado’s Motion Trio, and half of the Luís Lopes Humanization 4tet; confirmation, were it needed, that Lisbon is a thriving centre for creative music.

The pieces are simply numbered I to IV, each under 15 minutes. None are ground-breaking – there’s a tendency to promote improvised music as innovative in order to be worthwhile – and the session reflects the traditional virtues of collective focus, alert listening and imaginative input. The ensemble is sonically varied, with sounds acoustic and electronic, plucked and bowed, blown and struck, tuned and untuned. The opening improvisation makes full use of this range in a stark landscape traversed by sounds tentatively connected: an echoing piano frame and damped keys, bass flickers, powdery electronics, percussive chatter and clarinet burbles, and across it all a mist of saxophones that hangs in the air. ‘II’ comes to life with convulsions on piano, bass, cello and guitar, which form themselves into uninterrupted lines that swerve, loop and intersect in ever-accelerating exchanges. The babel reaches a peak when after a long wait the saxophones join the fray, resulting in a burn-out that dwindles into fugitive shapes, disconnected fragments from the previous material floating back to their original state.

Given the levelling-out that takes place, there are times when it’s helpful to disregard what instruments are playing and consider the aggregate, a conglomerate that bustles with variegated life. For listeners as well as musicians, the ear is an extension of the brain and therefore not just a passive receptor but part of our processing equipment. ‘III’ is all scintillating hues and porous boundaries, a whirl of centrifugal and centripetal forces with occasional melodic shards breaking through. The texture is circled by a bleep set on repeat and eventually reduced to a group of low resonances, frequencies that are opened out like a piece of reverse engineering to reveal an inner world of assorted colour and motion.

At one time there was a conscious avoidance of the recognisably idiomatic in free improvisation but the idea that musical personality can be shed is unrealistic, and probably undesirable – memory is more than a simple attic of the mind. Its traces inform and shape the here and now and music cannot exist in a disembodied present. On ‘IV’, saxophones indulge is some hard, free-jazz blowing inducing a kinetic response in the rest of the nonet. As throughout the album, nothing stays the same for long as they’re submerged by repeating patterns at different speeds, themselves transformed into melting layers of sound, decomposed and reconstituted until the close.

The album’s name is a play on the title to Erasmus’ satire of human self-deception and that of his Church, a book that is ironic yet also a recognition of the necessary part our foibles play in life. For the Unit, I suspect the album title carries the suggestion that musically, when approached in the right temper the unplanned is a constructive activity, however foolish that might seem, and that it can bring about those serendipitous moments that are valuable stimulants to the imagination. Or, to revert to Winnie the Pooh, “One of the advantages of being disorganised is that one is always having surprising discoveries”. Yes, Indeed.

Praise of our Folly is available direct from Clean Feed or Amado’s Bandcamp site.