Today we check out an upcoming release (Feb 1) by saxophonist Binker Golding and pianist Elliot Galvin with a premier of a track from the album. In addition, we're excited to present a Q&A with Byrd Out label head Stephen Vitkovitch and guitarist John Russell. Both are deeply involved with the improvised music scene in England and Vitkovitch is behind the upcoming Walthamstow Jazz Festival in mid-February.

So, let's start with the music, shall we? 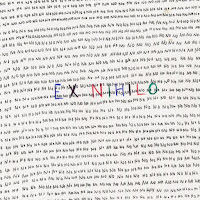 Ex Nihilo is the new recording by Elliot Galvin and Binker Golding. Both of these musicians are swiftly building on their reputations and here we see a combination of playing styles which fits together to create something more than a bit special.

'Aeturnam Vale' begins with piano and sax offering their different voices in many ways, from squiffs, squeals and squonks on the sax to wonderful stacatto piano interjections and brassy , string stroking additions. The sax at times waffles along lines ascending and descending the scales like a slightly demented , warbling banshee, into whose lines the piano drops and clunks in slightly off kilter, time warped progressions in the lower registers. This is a glorious opening, and the development around the 3 minute mark into an off-set take and give with the players suddenly in step offers wonderful contrast to that which went before. At times, this has elements of other musicians, from Brotzmann to 'Trane, especially with the sax parts in the latter stages. The length is long and fabulously so because it allows the improvisation to work its way back and forth between the musicians, regardless of time constraints. Long enough, beautiful. Latin for goodbye forever - hope not.

'Eram Quod Es, Eros Quod Sum' (I was what you are, you will be what I am) is eerie, atmospheric and gentle, the sax almost tentative, juxtaposed against heavy, throbbing keys and multi-string pumps which prove effective companions in a track which journeys into several rhythm patterns and more than a couple of mood swings. 'Ad Usum Proprium' ( For Your Own Use) begins with the sax sailing up and down the keys, with occasional interjections from the keys - nearly all of them initially on the key-change note but quickly deciding this is boring and swinging away, the deeper, moodier essences woven in as the piece progresses, still with the sax repeating its unchanging riff. Essentially a keyboard thought of profundity over a repeated pattern; interesting. 'Adaequatio Intellectus et Rei' (Correspondence of Mind and Reality) is simply wonderful with beautifully phrased sax motifs over thoughtful and well formed piano lines. An absolutely wonderful second half, full texture and full throttle from both players at opposite registers. And some real mouth-motor from Binker. Brilliant!

Aliquid Stat Pro Aliquot ( Something Stands for Something Else) is pure improvisational delight with just over 10 minutes of indulgence from both musicians - and for the listener. Keep an ear for the Eastern influenced section on this track and the lightly wailing tones which enter into the sax lines, perfectly outed by the ferocity of the keyboard. Changes of mood and tempo add to the interest across this track, which is a journey into and unto itself.

Non Plus Ultra ( Pique of Perfection ) begins with a single notes from the sax, from which a lilting, rolling theme develops and the piano echoes the key notes with chords, finding just the right time and placement to add to the essence of thoughtful beauty without detracting before it develops its own solo section of chordal progressions and finally a theme. This track plays like a dialogue - a truly original and changing story and perhaps sums up the musical essences heard across the CD best. Over the piano enters sax again, this time gently wailing, sighing and offering scale ascensions in the background while the keys continue the study of the theme. Hugely different and enjoyable , a great finish to a seriously good recording.

What this combination of musicians does is to bring forth elements of both which have not been evident in such abundance before. The essence of formal training purism has gone and Binker Golding can improvise his heart out whilst Elliot Galvin has delivered some powerful piano elements, proving he is turning into a force which needs to be heard. He is far braver on this recording than I have heard him before and it is good. High energy, spontaneous at times, and always interesting - there is hardly a moment when the mind switches off. There is a maturity here from both players which feels joyful and powerful. This is particularly strong on 'Aliquid Stat Pro Aliquot' and the opening track - both of which are absolute gems. A partnership meant to continue in musical development - who knows what is to come?


A Q&A with Byrd Out's Stephen Vitkovitch  and Weekertoft's John Russell on the Walthamstow Jazz Festival, their record labels, and what they do to keep improvised music alive ...


Stephen, your label, Byrdout first came to our attention with Waltham Moon ('61 Revisted) last year. Can you give us little background on the label and this recording?

(Stephen Vitkovitch - SV) Walthamstow Moon ('61 Revisited) was Byrd Out's second release. I'd put Evan Parker on twice in Walthamstow, and knew he'd seen Coltrane at the old Granada Cinema here in 1961, which is now Mirth, so I suggested he do a recording which touched on that. We did the recording with Evan, John (Russell) and John Edwards in one of the 3 old cinema rooms - it used to be one big room - so technically the same space Coltrane played to. The room was full of abandoned stuff, chairs piled high! But it sounds great. The label Byrd Out started as a side project from Janus Sounds which I was running with two brothers, essentially for more financially risky events, and the label grew out of the events really. It's named after Donald Byrd.

You have a new album coming out on Feb 1 with saxophonist Binker Golding and pianist Elliot Gavin coming out soon (and reviewed here). What inspired this this release?

(SV) I saw Binker and Moses supporting Soweto Kinch in Camden a few years back, and they blew me away. I'd been trying to get them to do a show for me up in Walthamstow, but never made it work. At the same time, Byrd Out moved more towards the records space, so naturally I asked Binker if he wanted to do something, building on the Evan, John and John record. He'd been knocking some ideas around with Elliot Galvin, and we agreed to roll with that, booking a day to record at the Vortex in April 2018. Quite a lot of steps later, here we are!

Can you tell us about the current scene for improvised music in Walthamstow?

(John Russell - JR) We did Discovery in 2017 at the Rose and Crown, had around 60 musicians, and released a download only on Weekertoft. It went very well, and it makes me want to do more. The question is time, money and commitment.

There are a number of improvising musicians who live in Walthamstow, there were more, but rents went up. Obviously there's me, there's Alex Ward, he's local, Sylvia Hallett lives in Tottenham. The night tube makes Walthamstow a more attractive prospect although it's a two way street.

Walthamstow's always had a history of stuff on the fringes, like Fred Judd, and John Smith the film maker. There's always been a connection with creative arts, the question is how to pull it all together with an audience that's London wide.

Stephen, you're curating the Walthamstow Jazz Festival this year, which comes up soon in February. Can you describe your approach to the festival? What makes it stand out?

(SV) I'd wanted to put on Ginger Baker for a long time, and with Waltham Forest as London's Borough of Culture in 2019, it seemed like now or never. So I worked out how we could do it with his agent Ina, while at the same time teeing up the likes of Evan, John and Laetitia Sadier to see if they would be able to do the dates we were looking at. The Borough of Culture Team at the Council were very helpful in getting things in place, so a big thanks to them. I've tried to take a fairly broad look at jazz, although not broad enough for some - when turning down one act they told me I was "to blame for the future of jazz music", which is a bit of a backhanded compliment. And we've had some great folk get in touch to play, which has been a huge help, and bodes well for 2020. With the range of music on, 16 February should be a great day!

John, can you talk a bit about your work with the Discovery Jazz Festival, as well as Weekertoft?

(JR) Discovery was a success, but I want to do something over a period of time so people get used to the idea! Weekertoft started with Paul G. Smyth, who is based in Dublin. It's a small run thing. They're individually crafted releases - like artwork multiples, quality things. Mopomoso (John's monthly event at The Vortex) is more regular, bashing stuff out. Helen Petts has made film for the Youtube channel, so has Kostas Chondros. It's a bit more like a penny dreadful - the newspaper aspect - yesterday's paper has today's fish and chips in it.

Improvised music is unique in that the musicians and the audience share the discovery of the music as it happens. There's always been a thing with improv about recording - the event is important, that's why Discovery and Moposomo are key, including the regular workshops. From the event more crafted artifacts can come, like records!

(SV) Yes, we're doing a limited run compilation CD that'll be available on the day of the festival - Whisky Juliet Foxtrot - which features some of the acts. Grab it if you're coming!

Sammy Stein will be covering the Walthamstow Jazz Festival for Jazz Bites Radio (US) on their Channel 2 starting shortly after the festival's peak times. For updates on the timetable, check out their site and/or their Twitter feed.