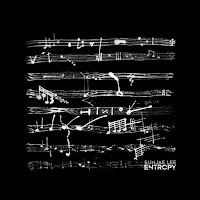 Based in Seoul, South Korea, saxophonist Sunjae Lee has steadily amassed a discography of thoughtful, creative, and forward-pushing jazz. His first three albums as a leader, Srivbanacore , Meditations , and Equilibrium , contained pieces that were often sparse, exploratory, and deeply-felt, with Lee often choosing to work with the tonal and melodic possibilities of solo alto saxophone. 2017’s Sounds Much Better (released under the name Trio Go) is perhaps more representative of the direction that Lee has taken with Entropy, his newest release: elusive small-group arrangements that trade contemplative quietude for something more dynamic.

Lee’s former classmate at the New England Conservatory of Music's School of Preparatory Education, celebrated trumpeter Peter Evans, also makes several appearances on the record; his presence is especially notable on the two duo improvisations, “Daedalus” and “Icarus.” The album itself opens with “Daedalus,” which initially sounds as if it might be a muted exploration of burbling tones and textures. Soon, however, Lee and Evans are engaged in a frenzied, feverish dialogue with one another: Lee traces out circular repetitions that occasionally splinter off into animal-like honks, while Evans moves at a breakneck pace through stutters, squeaks, and rasps. In comparison, the other duo piece, “Icarus,” is rather light-hearted; Lee and Evans start off with sprightly movements that call to mind two woodland creatures in carefree pursuit. As the piece progresses, though, things seem to fold in on themselves, with each player becoming more terse and constricted - like the mythological figure after which it’s named, the improvisation scrapes the heights, breaks apart, and dissolves.

Sandwiched between the two improvisations is “Alternative Facts,” a more traditional piece that finds Lee playing alongside his working trio, Minki Cho (on bass) and Junyoung Song (on drums). Cho and Song are surefooted and steady, providing the optimal foundation for Lee’s slippery explorations. In many sections, Lee is rather conservative in his approach - the patterns are free-flowing and even somewhat elusive, but they adhere together in a continuous, logical thread. At other times, however, Lee’s syntax fragments and cracks; he tosses out erratic squawks or ends ideas mid-stream. It’s this push-and-pull between a straightforward approach and more unhinged directions that imbues the piece with such a thrilling sense of confounded expectations. “Foxdeer” calls to mind Anthony Braxton’s small groups of the mid-70’s - not only in the configuration of players, but in the style and direction of the composition itself. The piece opens with a march-like fanfare that, similar to Braxton’s “Composition 23G,” takes as much pleasure in exploring the spaces between notes as it does in exploring the notes themselves. After this semi-celebratory introduction, things move into a more cerebral sphere: Evans spouts out staccato volleys of notes that often transmute into bristling, corroded barbs, and Lee’s soprano releases extended wails that drift mournfully over Song’s contemplative pulse. It doesn’t take long for the piece to transition back into more turbulent waters, but things just as quickly recede again.

“Agent Entropy” offers a refreshing change of pace. Song’s percussion pushes things along at a brisk clip, while Lee sends out flurries that gradually warp into more unexpected patterns and shapes. Cho remains as steadfast as ever, his bass-work serving as a reliable anchor for Song’s evasive fills and Lee’s protean phrases. The following composition, “Entropy,” initially appears to offer a pensive counterweight to the previous piece’s speedy pace, but (as the title itself suggests) things are quick to rupture, scatter, and shoot off in odd directions. With Chris Varga on vibraphones, the mood starts off quite cinematic and smooth - when Song enters the piece with his martial rhythms, however, the other players take it as a cue to investigate more anxiety-ridden territory. Lee and Evans begin adding odd, disruptive flourishes to their dialogue, like a conversation shot through with curses. “World on Fire,” the final composition, is similar to “Foxdeer” in that it is both spacious and roiling; the structure within which the players work is comparatively slack, allowing for each to carve out their own path. Both Lee and Evans take the opportunity to move through a range of textural shifts: hoarse guffaws, bubbling cackles, and occasional squeals. It’s not all clamorous exploration, however - interlaced with these more angular stretches are moments where the composition returns to the ground, where the mad rush of entropy settles and stills. As with many of the pieces on Entropy, this interplay of solid structure and topsy-turvy disorder provides a sense of instability that is simultaneously disorienting and exhilarating.

With its constant shifts between structure and freedom, order and decay, beauty and dissonance, in listening to Entropy one can’t help but be reminded of some of the “classic” free jazz groups; at the same time, the album has its feet firmly planted in the present day, with Lee and Evans in particular employing contemporary techniques to transform their respective instruments into bodily extensions - organs with which they spit, snarl, and sing, all in equal measure. Entropy is a fascinating work, and one that marks Sunjae Lee as a significant voice in contemporary jazz. Highly recommended!