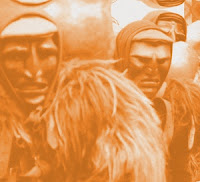 I've been putting off writing this review for days now. Mouth agape, shell-shocked eyes staring blankly into the distance. This record is serious business and gifts us with the debut solo long player from Mark Morgan, one third of the mutant industrial creature that was Sightings. You’ll want a moist towelette to wipe off the grimy goodness that gets splattered all over your existence. But it won't come off, it burns its way through, resolving you to a puddle of corrosive sludge that eats a hole into the center of the earth. It's that good. This is the first in Open Mouth Records’ recently announced solo guitar series and it definitely has me psyched for what's to come. Departing a bit from Open Mouth’s general no-frills aesthetic this record is really good looking; from the sleeve to the run out groove the physical copy is exceptionally well done. Attribute this to Open Mouth label head Bill Nace’s good taste and dedication in getting this album out there and doing it justice. It’s an explosive beginning to a series that’s sure to be full of amazing albums.

As for the uninitiated, if you like your guitar extra crispy you’ll want to order up a family size bucket of this delectable skronk. Fans of Keiji Haino and/or Fushitsusha’s brand of sonic mayhem will find much to love here, as will fans of Sightings (obviously), Wolf Eyes and Corporate Park, or perhaps those throttled by last year’s Chaos Echoes & Mats Gustafsson release. It's probably the best solo ‘noise’ guitar album I've heard since Alan Licht's 2013 masterpiece Four Years Older (IMO, of course). And yet to call this noise guitar feels like a bit of a misrepresentation as it implies (at least technically I suppose it does) a certain underlying haphazardness. That definitely doesn't feel like the base force at work here. While harshness undeniably plays a big part in the proceedings, this is an infinitely listenable record for fans of inventive textures, extreme processing, and dark industrial implications. The layers of heaving fuzz that Morgan conjures follow a warped logic that plays itself out within the possessed funhouse mirrors of these pieces. Like a sonic delirium, nothing behaves like you're expecting it to and everything seems down-right menacing, yet you can't snap out of the trance it puts on you nor would you particularly care to.

Jinx Hack creates a spectral atmosphere of squealing feedback and subtle dread. Morgan rips out peels of destroyed guitar squall over a sea of static and reverb. Gentlemen's C plies a rumbling loop with more subtle, scattered playing. The separate entities converge in a muted but violent rhythm that vibrates your eyeballs and rattles your teeth (play this loud). The final half of Side A is imbued with Supercomplication, a sprawling landscape of dark, sneering psychedelia where fissures of sound erupt irregularly. The probing guitar work is capped with a short reverb that blurs the edges like visual tracers. Side B opens up with a piece called Doctor Detroit that’s all crackling looped riffs and incandescent guitar spray. It's a gritty deluge of post-industrial atmospherics with guitar stabs that explode like shattering panes of glass. Towards its conclusion, the song gets a melodic wash of noisy guitar jangle that is progressively consumed by spattering of fuzz and hiss. A Guy Named Reggae is a moody change-up based off a drone of guitar haze that periodically bursts like streaks of white phosphorus. It briefly provides some space in the pressure cooker before Mikki dishes out death by a thousand piercing tones. The pins and needles fuzz blow out is a perfect close to a fantastic record.