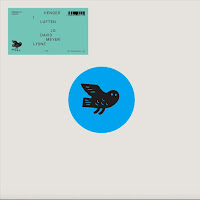 Norwegian guitarist Jo David Meyer Lysne is only 25 years old but already has developed an idiosyncratic aesthetic that borrows from the quiet, minimalism of Morton Feldman, the sparse, atmospheric soundscapes of guitarist Steve Tibbetts, and experimental sound art, all channelled into evocative, cinematic textures. His debut album as a leader, Henger i Luften (literally, ‘Hang in the Air’), is inspired by poet Rainer Maria Rilke’s conception of music: “Air’s other side, pure, gigantic, and not for us to inhabit”. This album follows his intimate duo with double bass player Mats Eilertsen (Meander, Øra Fonogram, 2017).

Henger i Luften features a chamber like acoustic sextet. Half of the musicians, including Lysne himself, extend their instruments sonic palette with subtle electronics. The ensemble was assembled to perform Lysne’s music for a silent film. Lysne recorded the ensemble in studio, then took the best realized ideas from the studio improvisations, recomposed and edited these pieces into a coherent cinematic narrative, with the help of producer-double bass player Jo Berger Myhre (from the Splashgirl trio).

Henger i Luften lasts only 32 minutes (and released as a limited-edition vinyl plus digital download option), but manages to suggest highly imaginary, enigmatic soundscapes. These soundscapes maintain a strong tension between the pure, dreamy sound of the acoustic strings instruments - Lysne’s acoustic guitar and prepared 12-string guitar, cello, viola, bass, plus the vibes, grand casa and sax, and the subtle yet sinister, ambient-synthesizer envelope. Lysne sketches with this tension detailed images of light and shade and desolate, frozen landscapes that intensify the cinematic drama. Lysne’s guitars tower in these mysterious soundscapes as a lone mountain that resonates and sings his hypnotic chants in an endless space, letting these sounds hang in the air.